Democrats Spend Big, and We Pay, for Their Socialist Dream 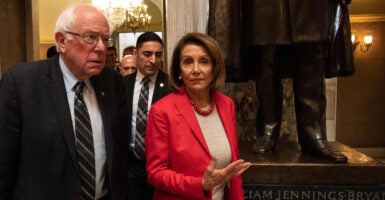 In 1983, Tom Cruise starred in the film “Risky Business.” It’s about wealthy parents in Chicago who go on vacation and leave the house under the stewardship of their high school-age son.

In short order, the boy throws a wild party, and the rest of the film is about the chaotic fallout.

It’s the closest thing I can think of to capture current reality in Washington, D.C., as the kids—the Democrats running the White House and Congress—throw their big party and breathlessly spend their parents’ money (in this case, our money), knowing that the party will be over when adults return.

The $3.5-plus trillion spending binge that Democrats are rushing to pass is not following a period of austerity. Record spending and debt have been piled on since the Obama years, using government to spend its way out of a government-induced economic collapse. And then we had the COVID-19 challenge and massive new government spending to get out of that.

Of course, this needs to be financed by taxes as well as borrowing, and the result will be higher taxes on corporations and on capital gains.

Perhaps you recall that the year after Donald Trump was elected president, a major tax bill was passed cutting corporate taxes, and the result was an economic surge from which all income classes in the country benefited. This will be reversed. Higher taxes mean slower growth.

It’s not like we’re looking at essential expenditures that must be made for our national well-being. Most of this spending is not about fixing roads and bridges and strengthening our military.

Most of it is to build the socialist paradise that Senate Budget Chairman Bernie Sanders, I-Vt., and House Speaker Nancy Pelosi, D-Calif., dream about: new household entitlements, new employer mandates, Medicare benefits expansion, and all kinds of corporate welfare subsidies in the name of the Green New Deal and industrial policy spending.

But let’s get to perhaps the most fundamental point.

These are so-called political leaders that pretend to care about America’s poor.

The last thing that America’s poor need is a slowed-down, sluggish economy, larded down by massive new government.

Furthermore, our federal government sets a horrible example for financial management for all American households. You don’t take on new debts when you haven’t dealt with the debts that are currently on your doorstep.

On Aug. 31, the latest annual reports from the Social Security and Medicare Trustees landed on the desks of Pelosi and the president of the Senate, Vice President Kamala Harris.

These reports show both programs gushing red ink and hovering on bankruptcy.

By 2034, just 13 years from now, Social Security will have cash flow to meet just 78% of its obligations. Its overall projected shortfall over the next 75 years is $19.8 trillion.

The Medicare Hospital Insurance Trust Fund will be bankrupt by 2026. In 2020, of the $925.8 billion in Medicare spending, only $430.3 billion was paid for by payroll taxes and premiums. The rest was borrowed, amounting to almost 16% of the federal deficit.

But not a word about this while Democrats push for massive new spending and debt.

Not only not a word, but they want to layer on new entitlements to Medicare, already gushing red ink, that will cost, per The Wall Street Journal, another $360 billion over the next decade.

The good news is President Joe Biden’s approval rate is falling, meaning that adults are paying attention. Hopefully we can hold on until the adults return in 2022, before the kids destroy everything.