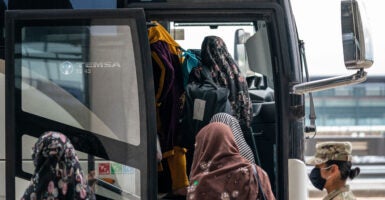 Evacuees who fled Afghanistan board buses that will take them to a processing center after arriving at Washington Dulles International Airport in Northern Virginia on Aug. 29. Sen. Ted Cruz, R-Texas, fears there could be some potential terrorists among the evacuees. (Photo: Kent Nishimura/Los Angeles Times/Getty Images)

On Tuesday, Secretary of State Antony Blinken will testify before the Senate Foreign Relations Committee, a committee on which I serve.

The secretary has a lot of explaining to do.

In the past month, we have seen a catastrophic failure of policy in Afghanistan by the Biden administration. Over and over and over again, President Joe Biden and top officials in his administration made policy decisions that demonstrated their radical ideology and manifest incompetence.

They allowed military vehicles and weapons, and key infrastructure, such as Bagram Airfield, to fall into Taliban hands. They left stranded hundreds of Americans and Afghans who risked their lives to support the American military mission.

Further, they loaded tens of thousands of unknown and unvetted Afghans on flights to the United States without sufficient concern for security, public health, or human rights.

Two weeks ago, I toured housing that’s being built at Fort Bliss in El Paso, Texas. The camp will house up to 10,000 Afghan evacuees. At the time, there were flights coming in with evacuees every couple of hours. I asked the commanding general what they were doing to ensure each arriving Afghan evacuee had been properly vetted, and he told me that vetting was being done in Afghanistan.

We now know, in fact, that in many cases vetting was inadequate and, worse, in other cases, checks weren’t even attempted until they arrived in the United States.

Afghanistan is an exceptionally dangerous place, where radical Islam is pervasive. We saw that just two weeks ago when a suicide bombing took the lives of 13 servicemen and women.

Of the roughly 30,000 Afghans already brought to the United States, about one-third had not been sufficiently screened and had to be rescreened. One hundred Afghans triggered security alerts—one of whom had previously been deported after committing rape while in the United States.

If even just one or two people among the evacuees are seeking to commit acts of terrorism, we could see a suicide bombing in an American mall, restaurant, or other public venue.

The failure goes beyond security. Afghanistan is also awash in horrific crimes against, and abuse of, women. According to the World Health Organization, 59% of women are married as child brides, and 90% of women are subject to domestic abuse. That behavior is rightly both shunned and criminal in the United States.

The Biden administration had a responsibility to ensure that the Afghans being brought to the United States share our values.

We also know that, instead, Biden imported a potential humanitarian crisis into America. According to documents from the departments of State and Homeland Security, there have been numerous incidents at intake centers of sexual abuse in which much older Afghan men have presented young girls as their “wives.” Some of these Afghan men reportedly exploited the withdrawal process itself, and more specifically their access to the United States provided by the Biden administration, to facilitate their abuse.

The administration has so far refused to acknowledge that risk of bringing in thousands of Afghans who haven’t been through adequate vetting, including savages who beat and rape girls they’ve forced into child marriages.

Not only did Biden surrender to the Taliban, which is right now flying the Taliban flag over the former U.S. Embassy in Kabul, flying Black Hawk helicopters, and parading advanced weapons from the U.S. military, he brought potential terrorists and predators onto U.S. soil.

That is inexcusable. America needs answers, and we need them now.

This column first appeared at RealClearPolitics.com.