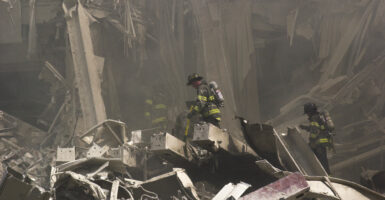 Firefighters search for survivors after the collapse of the World Trade Center on Sept. 11, 2001. (Photo: Matt Moyer/Corbis/Getty Images) 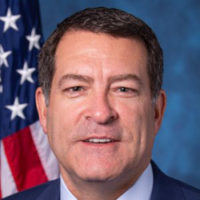 After fighting in Afghanistan to overthrow a government that harbored Osama bin Laden and refused to cut ties with al-Qaeda, watching Afghanistan fall back into the hands of the Taliban is heartbreaking for me and for every other service member and veteran who dedicated his or her service to fighting in the war on terrorism.

There is no doubt that, under Taliban rule, Afghanistan will once again become a place of brutality—where women are habitually abused, religious minorities are persecuted, and democracy is once again forced out.

There’s also no question that Afghanistan is reestablishing itself as a safe haven for terrorists. That is gut-wrenching for anyone who remembers what it felt like watching the aftermath of the four planes that crashed into America’s symbols of pride and strength.

We will never forget the 2,977 innocent souls lost, the Twin Towers crumbling to the ground, dust-covered Americans running through the streets of New York, the Pentagon on fire, Flight 93 in shards, or American hearts shattered to pieces.

But we will also never forget the firefighters and first responders who ran into the burning buildings, the American flag being hoisted on top of the rubble, the U.S. Congress spontaneously singing “God Bless America” on the steps of the Capitol, or learning how the passengers of Flight 93 fought off the hijackers, saving one of our national treasures.

As flags flew at half-mast around the country, we came together as a nation. The world mourned with us, and we chose to respond with strength.

We chose not to go down in history as victims, but as victors. We responded by hunting down the masterminds of the attack and destroying their network, as well as the government that harbored them.

Our country lost 2,461 service members in the war on terrorism, and 20,744 others were wounded. Those sacrifices have prevented another 9/11 for two decades, and will continue to serve as a precedent for the bravery and honor that our country represents.

I’ve seen more flag-draped coffins than I can count, but I know those sacrifices were worth it. Defending our country and defending the freedoms we hold dear is always worth it.

Yet now, after President Joe Biden’s horribly botched, catastrophic Afghanistan debacle, we are back to where we were in 2001. Not only is the Taliban back in control, but it now has more than $80 billion of U.S. military equipment left behind by Afghan National Security Forces—equipment it will use to oppress its own people—and, once again, it will harbor al-Qaeda.

We already know that the Taliban never cut ties with al-Qaeda and that it even had the Haqqani network, an affiliate of al-Qaeda, run security at the Hamid Karzai International Airport during the evacuation. It’s more than likely that it was Haqqani members that allowed ISIS-K fighters to breach security at the airport, killing nearly 200 people, including 13 U.S. service members.

Biden ignored the warnings of the military and the intelligence community, he ignored the pleas of our Afghan allies and NATO partners, and he chose to pull our troops out, knowing the Taliban was quickly gaining ground. He has expressed no regret and no remorse for those decisions.

Biden didn’t care what was left behind in Afghanistan—Afghan allies, dangerous weapons of war, and most egregiously, Americans. All he cared about were the optics of ending the war before the 20th anniversary of Sept. 11.

But now the United States has a black eye in front of the entire world. How’s that for optics?

Biden did not end the war. Al-Qaeda will never declare peace with the West, and ISIS-K will stop at nothing to spread its jihad. We are in a more dangerous position than ever before due to a intelligence near-blackout. Without eyes on the ground, it will be exponentially more difficult for us to contain terrorism.

Jihad is no respecter of national boundaries. Anyone who thinks the United States is safer because we no longer have troops in Afghanistan is naive.

I have argued that we need a nearby base in the region with a quick reaction force, which would help support intelligence missions, such as real over-the-horizon capabilities. Yet, even that won’t be enough to fully contain extremism in the region. And with our porous southern border, we have no clue who is coming into our country.

Our national security situation is far more precarious today under Biden than it has been since the war on terrorism began. We have a feckless president who cares more about appeasing the woke mob than making sure our country is safe.

We need a commander in chief who is willing to lead and take national security threats seriously. That is not—and will never be—Joe Biden.