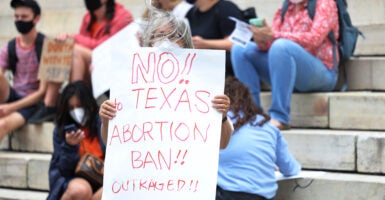 A woman displays a sign at a pro-abortion rally in Brooklyn, New York, on Sept. 1, after a Texas law dubbed the "Heartbeat Bill" went into effect. (Photo: Michael Santiago/Getty Images)

In the matter of a new Texas law banning abortions six weeks after gestation, when a fetal heartbeat can usually be detected by vaginal ultrasound, suppose the headlines had been different?

Instead of words like “most restrictive in nation” (The Wall Street Journal) and “Supreme Court refuses to block Texas law” (The Washington Post), along with four stories splashed across the front page of The New York Times that seemed to be written from the perspective of pro-choice writers, what if the headlines had instead reflected another point of view that took the side of babies and the women who carry them?

Those headlines and stories might have read: “Supreme Court decides to protect babies, recognizing Thomas Jefferson’s writing about endowed life coming from God.” Or, if that’s too long for headline writers, how about “Supreme Court takes side of the unborn”?

Might that have changed the perception about abortion by people who are on the fence, or conflicted? Information, including sonograms for abortion-minded pregnant women, has been shown to change minds. So has compassionate counseling and adoption services at pregnancy help centers.

Much has changed since 1973, when a court majority found in Roe vs. Wade that a “penumbra” was hidden in the Constitution, which translated into a “right to privacy” so that a woman could legally terminate her pregnancy without interference from anyone, including the father. Since that ruling, the “right” to an abortion has been extended to include second-trimester abortions  and to cover babies born alive after an attempted abortion.

Virginia Gov. Ralph Northam, a Democrat and a pediatrician, has suggested that a baby who survives an abortion should be “kept comfortable” and “resuscitated” and then “a discussion would ensue between the physicians and the mother.” Does this not suggest infanticide?

The definition  of “penumbra” is revealing: “the partial or imperfect shadow outside the complete shadow of an opaque body.” If that sounds unclear when applied to the Constitution, that’s because it is. Then-Justice Harry Blackmun, who used the word, clearly was not a textualist in the way Justice Antonin Scalia was. It appears he read his own bias into the Constitution when he could find no justification for abortion elsewhere.

Judges reading into the Constitution their own biases, even prejudices, has long been a problem. It is a power the Founders never intended the courts and especially the Supreme Court to have.

The Texas law will still be challenged in other ways, as will a Mississippi law the Supreme Court has decided to hear this fall. That law, if passed, would ban most abortions after 15 weeks.

National Right to Life, which tracks figures from the Centers for Disease Control and Prevention and the Guttmacher Institute, estimates there have been more than 62 million abortions since 1973, and the number of abortions each year has been steadily declining.

Many women have said they regretted their decision to have an abortion; many uphold that difficult decision. It seems we long ago shifted from doing what might be best for others to doing what was best for self, perhaps a reflection of the spirit of the modern age.

Abortion and refusing to take personal responsibility for one’s actions have contributed to a general coarseness and disrespect for life at all stages, as witnessed by the shooting sprees regularly occurring in Chicago and other major cities. The Texas and Mississippi laws seek to reverse, or at least slow down, the process of squandering human life.

The question remains: Is abortion the cause of our increasingly decadent culture, or a reflection of it?