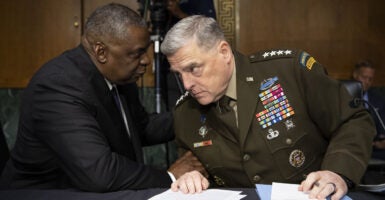 The issue at hand is whether an overthrow of the way America is constituted is something cadets should be taught at military academies. Pictured: Defense Secretary Lloyd Austin, left, and Army Gen. Mark Milley, chairman of the Joint Chiefs of Staff, confer June 17 before the start of a Senate Appropriations Committee budget hearing. (Photo: Caroline Brehman-Pool/Getty Images)

An amendment rejecting the use of critical race theory in America’s military academies may not have made it out of the House Armed Services Committee, but one thing the spirited debate Wednesday made clear is that Republicans understand the discipline far better than Democrats.

Armed Services Chairman Adam Smith of Washington, Anthony Brown of Maryland, Jackie Speier of California, and other House Democrats, meanwhile, either mouthed superficialities or struggled to explain what critical race theory is.

Republican members of the committee obviously have devoted time to studying an academic discipline that is now force in all aspects of American life because the issue has become important to their constituents.

Democrats, taken aback by the furor, have chosen instead to fight a rearguard battle by minimizing the importance of critical race theory, or even deny it has escaped the faculty lounge.

The Republicans’ demonstrable grasp of the topic was evidenced in the backhanded compliment paid by Rep. Joe Morelle, D-N.Y., when he remarked on the “significant irony” that Banks, Gaetz, and the others seemed to have “read extensively about critical race theory, but it doesn’t appear that they have become indoctrinated.”

Morelle went on to say of his Republican colleagues: “The fact that they have read extensively on this takes away from their argument.”

The nation’s men and women in uniform deserve the same opportunity to read about critical race theory and then make up their minds, Morelle added.

Gaetz had a good answer.

“There is a difference,” he said, “between reading something as a lawmaker because you’re trying to understand its context in pedagogy and society and having something delivered to you as a student in the military academies.”

Asking service members to learn critical race theory also comes with “an opportunity cost,” Gaetz said, since it would detract from their time studying “real stuff” such as “cyber and warfare.”

Nobody would ever accuse Brown of reading extensively on critical race theory.

“I will reject the notion that critical race theory promotes the idea that this country was built on hatred, and that it’s a racist country,” the Maryland Democrat said. “Critical race theory is just that: It’s a theory, it’s a framework, it’s a concept of how to consider the relationships in our economy, our politics, our community, and how race has shaped us as a country. That’s critical race theory in a layman’s definition.”

Where to start? Critical race theory promotes exactly what Brown denies it promotes. Consider but one of the best-known foundational works, Cheryl Harris’ 1993 essay “Whiteness as Property.” At the very beginning of the country, Harris writes:

The racialization of identity and the racial subordination of blacks and Native Americans provided the ideological basis for slavery and conquest. … The origins of property rights in the United States are rooted in racial domination.

One can debate the merits and demerits in all this. What one cannot argue is that critical race theory does not promote the view that the United States was founded on racism and hatred.

“It is our hope that scholarly resistance will lay the groundwork for wide-scale resistance. We believe that standards and institutions created by and fortifying white power ought to be resisted,” Derrick Bell, the recognized godfather of critical race theory, wrote in a 1995 essay titled “Who’s Afraid of Critical Theory.”

The issue at hand is precisely whether such an overthrow of the way America is constituted is something cadets should be taught at military academies. Books by Ibram X. Kendi and Robin DiAngelo—not academic founders of critical race theory, but retail purveyors of it who make fortunes out of related training programs—suddenly have appeared on reading lists at West Point and in the Navy.

In sometimes contentious appearances before Congress, military leaders—including Gen. Mark Milley, chairman of the Joint Chiefs of Staff, and Adm. Michael Gilday, chief of naval operations—have defended the appearance of these texts and others in reading lists for service members following the Black Lives Matter-led protests and riots of last year.

Banks said that Kendi’s book “How to Be an Antiracist,” which argues that the language of colorblindness in our Constitution is a “mask to hide racism” and that we have “a colorblind Constitution for a White-supremacist America,” should not be taught to those asked to put their lives on the line to defend the Constitution from enemies foreign and domestic.

Banks’ amendment, rejected along partisan lines after the vigorous debate in committee, would have removed these books from use in military academies.

“It is not sustainable for this country to ask men and women to raise their right hand and swear to support and defend the Constitution of the United States … when we are teaching them that America is inherently racist and evil,” Banks said.

In one of the most pointed lines in his opening statement, Banks said, “I can’t help but wonder what would have happened if Gen. Milley had spent more time on a plan withdrawing from Afghanistan than on prioritizing this dangerous anti-American garbage.”

Milley rightly has come under heavy criticism from conservatives for defending critical race theory and other aspects of woke ideology. The chairman of the Joint Chiefs of Staff said at one point earlier this year, for example, that he needed to read more on “white rage,” a concept of critical race theory that explains any conservative pushback against the left’s cultural gains as a form of white supremacy.

The sentiment is understandable, although to be fair, Heritage Foundation scholars hear that Milley and others at the Pentagon developed and submitted four or five solid plans for a methodical, orchestrated, well-sequenced withdrawal of U.S. troops from Afghanistan.

President Joe Biden reportedly rejected all of these plans, chose the worst possible option—an abrupt withdrawal—and ordered the military to execute it. Within that box constructed by the commander in chief and his team, the military did a superb job.

Blame for adopting critical race theory in the military ranks also should be on the political leadership. The buck stops with the Oval Office, as Biden often says, right before he shifts the blame to everyone and everything else.