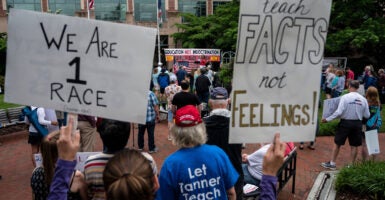 The “Pledge to Teach the Truth,” which has over 6,900 signatures, argues that legislation opposing critical race theory “requires teachers to lie to students” about the history of the U.S. Pictured: People hold signs during a rally against critical race theory being taught in schools at the Loudoun County Government Center in Leesburg, Virginia, June 12, 2021. (Photo: Andrew Caballero-Reynolds/AFP/Getty Images)

Thousands of teachers are planning to gather in over 115 cities across the U.S. this weekend to protest legislation reining in critical race theory.

The “Days of Action” and the “Teach Truth Pledge” event, hosted by the Zinn Education Project, will take place Aug. 27 through Aug. 29. The events across the country are advertised as raising “public awareness about the danger” of bills to counter critical race theory.

Critical race theory holds that America is fundamentally racist and teaches people to view every social interaction and person in terms of race.

In at least 27 states, legislators have introduced or enacted legislation that imposes limits on curricula discussing racism, sexism, and oppression in American history, ABC News reported.

Other bills would ban teaching that “meritocracy or traits such as a hard work ethic are racist or sexist or were created by members of a particular race to oppress members of another race,” as a Texas bill puts it, and that “the United States is fundamentally or irredeemably racist or sexist,” as seen in Tennessee’s bill.

“It’s really important as educators that we don’t allow these bills to put us on the defensive, and instead we use the opportunity to take these actions to highlight the racist path of our country, of our states, of our cities, that needs to be reckoned with,” Adam Sanchez, a history teacher in Philadelphia, told ABC News.

The “Pledge to Teach the Truth,” which has over 6,900 signatures, argues that legislation opposing critical race theory “requires teachers to lie to students” about the history of the U.S. and aims “to prohibit teachers from teaching the truth about this country” being “founded on dispossession of Native Americans, slavery, structural racism and oppression.”

Local organizers were told to host the event in a “place that symbolizes or reflects stories that would be prohibited under the proposed legislation,” according to an event sign-up form. “For example, any site in Black, Latinx, Native American, Asian American history. Also, any site that addresses labor, climate justice, or LGBTQ history—or contemporary organizing—for any race/ethnicity.”