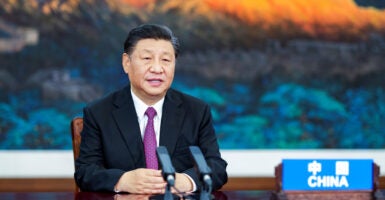 The debacle unfolding in Afghanistan has led as much to questions of how China might exploit this as it has analysis and discussion of what is ongoing in Kabul. Pictured: Chinese President Xi Jinping addresses the Informal Economic Leaders' Retreat of the Asia-Pacific Economic Cooperation in Beijing on July 16. (Photo: Li Xueren/Xinhua/Getty Images)

In the rarified atmosphere of Washington, the debacle unfolding in Afghanistan has led as much to questions of how China might exploit this as it has analysis and discussion of what is ongoing in Kabul.

One regularly asked question is whether Beijing will feel emboldened to invade Taiwan, either because the U.S. is preoccupied with evacuating Americans from Afghanistan or because the U.S. military’s vaunted reputation has taken a beating.

It is certainly possible that China might take advantage of the diversion of American attention to seize Taiwan, but hardly likely. A cross-straits invasion is not something that is planned overnight.

Indeed, the scenes beamed from Kabul demonstrate that even a relatively limited amount of opposition can massively disrupt complex operations. The Taliban is not even trying to shoot down American aircraft that are trying to evacuate people, and yet the evacuation is a shambles.

An actual invasion, such as an invasion of Taiwan by China, would be far more complex, and face far more opposition. It is unlikely that Beijing is about to commit the necessary forces on a whim, no matter how attractive.

Another question is whether China will want to step into Afghanistan to forestall a political vacuum or to halt the potential for the Taliban to support Uyghur separatists in China.

Such questions fail to recognize the fundamental ties between the Taliban and Pakistan, and between Pakistan and China. The United States was never able to deny the Taliban a sanctuary in next-door Pakistan. Indeed, the Pakistani security services had played a key role in the creation and sustainment of the Taliban, even before 9/11.

But if Pakistan was willing to defy the United States (to the point that Osama bin Laden was hiding, not in Afghanistan, but in Abbottabad, Pakistan), it has proven far less willing to challenge China. Ties between China and Pakistan have long been close, ever since Pakistan recognized the fledgling People’s Republic of China in 1950 (the third country to do so). Pakistan’s leaders have described China as their “all-weather friend,” compared with the United States, which is described as their “fair-weather friend.”

Would Pakistan be willing to jeopardize its relationship with the People’s Republic of China in order to support the Taliban, should the Taliban contemplate spreading radical Islam into China? Pakistan’s policies toward Uyghurs indicates that Islamabad values its ties to Beijing far more than any kind of Islamic solidarity. In this regard, Pakistan is further supported by the Organization of Islamic Cooperation, which in 2019 passed a resolution endorsing China’s treatment of its Muslims.

In short, Taliban radicalism against China would likely be a lonely effort.

A final question is whether China would want to exploit the mineral resources of Afghanistan. The nation is said to be a treasure trove of various minerals, including rare earths. But the Chinese, while seeking resources from around the world, already have sources for many of these resources. This is not to suggest that Beijing would ignore Afghanistan’s minerals, but that it is not necessarily in a hurry to access them.

China’s patience is likely to be rewarded if it waits and uses the interval to get a better understanding of the various tribes, personalities, and ethnic groups in the region, and negotiate from a position of cultural and ethnic familiarity.

What China gains in light of the catastrophic American failure in Afghanistan is a wonderful opportunity to highlight American unreliability and fecklessness. As Beijing has already signaled to Taiwan, if Washington won’t support Afghanistan, where it has trillions of dollars, thousands of lives, and fought for 20 years, why should Taipei believe that Washington will commit itself to Taiwan’s security?

What is even more problematic is that these same questions are undoubtedly being asked, unbidden, in capitals around the world, even if Beijing weren’t pressing the issue. The People’s Republic of China doesn’t have to try and create an image of American unreliability and potential incompetence. It merely has to point to the chaos at Kabul airport and the inexplicable decision to pull American military forces out while there were still tens of thousands of civilians inside Afghanistan.

It remains to be seen what actions Washington will take to try and retrieve the situation, and limit China’s ability to capitalize upon these opportunities.