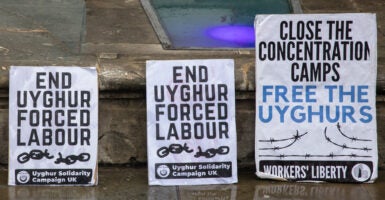 The Uyghur Solidarity Campaign of the United Kingdom displays placards at an Aug. 5 protest opposite the Chinese Embassy in London in support of the Uyghur people's struggle for freedom. (Photo: Mark Kerrison/In Pictures/Getty Images)

U.S. Customs and Border Protection has issued 13 withhold release orders against imports from China since 2018 to stop goods produced with forced labor from entering the U.S. market.

Those orders largely focus on goods from the Xinjiang province, where millions of Uyghur Muslims face what the U.S. government identified as ongoing genocide and crimes against humanity.

During a House subcommittee’s hearing July 21, witnesses said that despite the orders, more action was needed to combat forced labor in Xinjiang.

Neha Misra, the global lead for migration and human trafficking at the Solidarity Center, said at the hearing that U.S. Customs and Border Protection “should place more emphasis on self-initiated actions by the agency itself; issue more [withhold release orders] related to other countries and sectors; train staff on identifying indicators of forced labor; and focus on worker remediation measures and ensuring working agency in enforcement.”

One way to aid in that effort would be to increase resources and expertise within Customs and Border Protection’s Forced Labor Division, which is tasked with issuing and carrying out the laws related to those goods.

Any adjustment in resources for the division should be done in a fiscally responsible manner. For example, The Heritage Foundation’s “Blueprint for Balance” recommends more than $2.7 billion in cuts for the Department of Homeland Security. A small amount of those resources could be reallocated to Customs and Border Protection’s Forced Labor Division.

Congress has given Customs and Border Protection the authority to stop goods made with forced labor from crossing our borders. Now, Congress needs to commit to helping it enforce the law by prioritizing resources for the Forced Labor Division to effectively investigate flagged imports.

House Democrats called for $25 million in additional resources for combating forced labor in an April letter to the House Appropriations Committee. They argue that Customs and Border Protection’s Forced Labor Division “has been drastically underfunded to meet our forced labor enforcement needs, despite continued and growing evidence of the use of forced labor and child labor in the supply chains of products imported into the United States from around the world.”

More specifically, the letter explained that the “funding would support at least 75 [full-time employees], including training costs, to work on forced labor and would support improvements to technology.”

President Joe Biden’s budget, on the other hand, failed to mention combating forced labor as a priority for the administration.

However, the Department of Homeland Security’s budget justification report requests $12.7 million for the Advanced Trade Analytics Platform to help identify and stop shipments with goods produced with forced labor.

The goal of the platform for 2022 is to streamline the data surrounding forced labor and the case management in forced labor investigations.

Addressing human rights violations against Uyghurs is a bipartisan issue.

In fact, the Uyghur Human Rights Policy Act of 2020 was passed by unanimous consent in the Senate and received overwhelming support in the House. In July, the Senate also unanimously approved the Uyghur Forced Labor Prevention Act, which would more stringently target goods imported from Xinjiang.

Neither of those bills included prioritizing resources for Customs and Border Protection’s Forced Labor Division, however. Congress needs to affirm its commitment to human rights by equipping it with the expertise and resources it needs to combat forced labor.