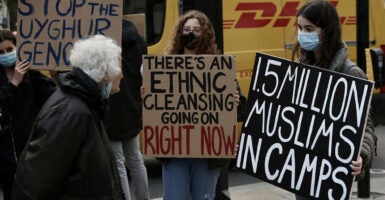 China’s violations of religious freedom at home are completely at odds with the norms of international human rights espoused by the United Nations. Pictured: People hold placards during a protest in London to support Uighurs and the ongoing human rights violations in China's Xinjiang autonomous region, home to the ethnic Uighur Muslim community, Oct. 8. (Photo: Hasan Esen/Anadolu Agency/Getty Images)

On the matter of religion in China, Beijing has made one thing perfectly clear: No religious group lies beyond the grasp of the Chinese Communist Party.

Late last month, the Jamestown Foundation reported on a new Chinese Communist Party program of collectivization and reeducation in Tibet similar to the forced labor campaign being carried out against Uighurs in Xinjiang province.

In 2020 alone, just under 600,000 rural Tibetans were subjected to this program of indoctrination and retraining for various forms of menial labor.

The military-style training program is accompanied by a labor-transfer program that redistributes workers to places other than their hometowns—often to places outside of Tibet.

Rapid collectivization separates person from place, uprooting individuals from their heritage, replacing their native language with Mandarin, and reorienting and secularizing their religious traditions to conform with the tenets and goals of the Chinese Community Party.

We have heard this story before. We will no doubt hear it again. Never does it have a happy ending.

In 2017 reports emerged that the Chinese Communist Party was collectivizing and interning Muslim Uighurs in political reeducation facilities in China. Early estimates of a couple of hundred thousand having been placed in the camps were quickly revised to reflect the true picture: camps holding approximately 1.8 million Uighurs.

The lucky few who have been released subsequently shared stories of hearing the screams of neighbors down the hall being tortured, of receiving forced injections that left them sterilized, and other horrors.

Like Tibetans, Uighurs are also subject to forced labor. Among those not yet taken to political reeducation camps, well-educated Uighurs are being forced out of their white-collar jobs and into blue-collar labor. And they, too, have been subject to systematic labor transfers.

The Chinese Communist Party’s coercive measures to restrict family size among Uighurs have raised concerns that Beijing’s ultimate goal is to significantly limit, or perhaps altogether eliminate, the next generation. Its targeted policy of forced sterilization and forced implantation of IUDs, combined with its brutal practice of forced abortions and infanticide, have already moved in that direction.

There are also reports of Uighur children being torn from their families and forced into state-run boarding schools. Coercive reproductive limits and the transfer of children from one group to another may constitute genocide or crimes against humanity.

The Chinese Communist Party has long viewed independent religious practice as a threat to its rule. While the party doesn’t seek to eliminate religion, it does seek to supplant the place religion holds in the hearts and minds of its adherents. And if it cannot supplant it, it tries to co-opt it, at the very least.

Persecution of persons of faith has intensified under Chinese President Xi Jinping’s policy of Sinicization, which aims to secularize religion to ensure that it advances the party’s goals.

The policy accomplishes this, in part, through setting up state-sanctioned religious institutions that moderate and even modify the ways in which people of all religions practice their faith.

Under Sinicization, regulation of and outright interference with religious practice have intensified. Christians have seen crosses torn down from atop churches, church buildings demolished, and pastors, like Pastor Wang Yi of Early Rain Covenant Church, imprisoned.

Chinese Catholics watched their leaders strike a deal with Beijing two years ago, giving the Chinese Communist Party a say on the appointment of bishops in China.

And just last week, it was reported that government-issued high school textbooks altered a Bible story to turn one of Jesus’ key teachings on its head: After inducing others not to cast stones at a woman who has sinned, Jesus himself stones her.

Other religious movements have fared no better. Reports abound that members of Falun Gong, a spiritual movement founded in the 1990s, were subjected to organ harvesting and extrajudicial imprisonment.

Although not persecuted as severely as the Uighur Muslims, Hui Muslims have not escaped unscathed. They, too, have seen their mosques closed and religious practices curtailed.

While the Chinese Communist Party may target each group for unique reasons, what motivates its anti-religious actions in general is the threat it believes religion poses to its authority. It thus views religious persecution as being essential to its internal stability.

Recognizing the importance the Chinese Community Party places on restricting religious practice should inform the responses of the U.S. government and the international community.

China is one of the world’s most egregious violators of internationally recognized human rights. Yet last spring it was appointed to one of the five seats on the United Nations human rights panel that selects experts who report on places like Xinjiang and Tibet. And, with that appointment, Beijing is now poised to take one of the 47 seats on the U.N. Human Rights Council.

China’s violations of religious freedom at home are completely at odds with the norms of international human rights espoused by the United Nations. Should China take the helm of the Human Rights Council, those norms could be altered beyond recognition.

No matter who wins the presidential election this November, religious freedom must continue to be a core priority of American foreign policy.

Last week, 39 countries signed a statement at the U.N. General Assembly calling out China’s abuses in Xinjiang; this was the fruit of Secretary of State Mike Pompeo’s work. The U.S. government must continue to lead the way in this effort and in calling for the release of all political prisoners, including those interned for their religious beliefs.

Upholding the right of all people to live out their closely held beliefs is essential to the preservation of freedom, peace, and security.

Defending religious freedom is also a critical element in countering the schemes that China and like-minded governments devise to cement and increase their power, which entail human rights violations as severe as genocide and crimes against humanity.