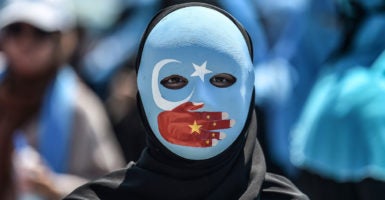 At least 1 million Uighurs—a Chinese ethnic-Muslim minority—have been sent to “political re-education camps” to erase their identity and assimilate them into the Han majority for the purposes of conforming their religious beliefs to the party’s beliefs. Pictured: A demonstrator attends a protest to denounce China's treatment of ethnic Uighur Muslims during a deadly riot in July 2009 in Urumqi, in front of the Chinese consulate in Istanbul July 5, 2018. (Photo: Ozan Kose/AFP/Getty Images)

Caleb Kostreva is a member of the Young Leaders Program at The Heritage Foundation.

For six months, China has been the focus of international criticism over deteriorating freedoms in Hong Kong, but the Chinese Communist Party’s intransigence regarding liberty in Hong Kong is only one of myriad repressive campaigns that the world should oppose.

People in Hong Kong possess far greater freedom of expression and speech than those in mainland China. So, as Hong Kongers protest China’s violation of their rights, they also shed light on the gravity of the repression of Chinese people on the mainland.

There are hundreds of millions of people in mainland China, however, whose voices remain unheard.

Yet in a recent white paper published by the Chinese government, Beijing boldly asserted what it believes are advances in respecting its citizens’ fundamental rights.

The Chinese Communist Party claims that the “aspiration and the mission of the Party is to seek happiness for the people of China” and that putting the people at the “center of all its work is the supreme pursuit of the Party.”

Its second claim is far bolder: “Living a happy life is the primary human right.”

This mission, while it might sound nice, is wholly unrepresentative of the reality facing the Chinese people.

Those rights enumerated by the Communist Party, unsurprisingly, conform to the party’s ends, even if that violates an individual’s right to freedom of religion, freedom of expression, or any other seminal liberty. It makes sense then that, contrary to the Chinese government’s claims, the Chinese people enjoy a fraction of the rights enjoyed in the free world.

Those who dare to hold religious beliefs, for example, are subject to severe persecution. At least 1 million Uighurs—a Chinese ethnic-Muslim minority—have been sent to “political re-education camps” to erase their identity and assimilate them into the Han majority for the purposes of conforming their religious beliefs to the party’s beliefs.

Further, it exposes China’s thinly veiled bid to completely annihilate religion in China through its campaign for the “Sinicization of religion.”

For a country that claims to be a stellar example of human rights, China’s egregious violations of the most fundamental human rights standards contrast starkly with its propaganda.

The average citizen in China likely won’t be able to read this article, because it’s censored.

Nor can they read factual reporting on the Hong Kong protests. Chinese citizens are fed propaganda that the protesters are terrorists, paid by Western countries to riot and create disorder, and are lying about their injuries.

Nor can they read about the ethnocide of Uighurs. Rather, they are told a myth by the government of “vocational training schools” where a backward people are helped to become civilized and shake off Islam as a foreign influence.

A battle over values is being waged in Asia, and China is at the forefront. As China asserts a concerning vision for human rights, the U.S. should be ready to counter with arguments that favor liberty, freedom, and fundamental human rights.