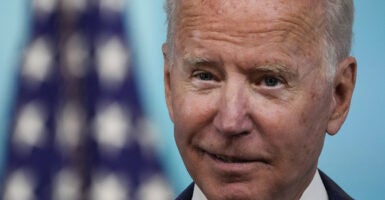 The media has been highly critical of Biden’s false claims about Afghanistan, but has proven to be far less likely to challenge him in person. (Photo: Drew Angerer/Getty Images)

President Joe Biden is still in the midst of the worst stretch of news coverage of his administration—and it’s one of his own creation.

Facts that have emerged about Biden’s calamitous withdrawal of American troops from Afghanistan show that he was unwilling to listen to his own military leaders, changed his story about his faith in the Afghan fighting force, and told other easily disprovable falsehoods about conditions on the ground.

To their credit, the news media have been extremely tough on Biden, calling him out on his inaccurate or inconsistent statements and holding him accountable when his rhetoric doesn’t match reality in Kabul. But that’s only when he’s not in the room.

At last Friday’s press conference, presumably arranged to help him gain better communications footing on Afghanistan, Biden actually took questions, albeit from a small, preselected group of reporters. It’s easy to see why the White House keeps Biden under wraps much of the time, because he got himself into trouble on several fronts.

The commander in chief made several dubious claims that were either immediately refuted by others in his administration or by media located at the scene of the chaos.

He claimed that al-Qaeda was “gone” from Afghanistan when it has a presence in at least 15 provinces.

He disputed that there have been criticisms from our NATO allies, when in fact complaints have been public and plentiful.

And he assured us that Americans were having no trouble reaching the airport in Kabul to catch a flight home, when in truth some have been harassed and beaten.

Indeed, one day after Biden’s remarks, the U.S. Embassy in Kabul advised Americans to avoid going to the airport altogether until they were directly instructed to do so by someone from the government.

Following Biden’s appearance, the media dissected all of these statements and laid out in great detail how wrong the president was on each count. For a media that has been extremely forgiving of Biden’s many flaws, it was an impressive display of “speaking truth to power.”

The Sunday morning shows piled on, with hosts and guests pointing out Biden’s fallacies.

And so, when Biden announced another press conference on Sunday afternoon, the stage was set for White House reporters to ask Biden “what he didn’t know and why he didn’t know it.”

Only that didn’t happen.

Incredibly, none of the reporters present, many of whom represented outlets that had blasted Biden for his falsehoods of 48 hours earlier, could summon the courage to confront him with the most obvious questions about his previous statements.

The most adversarial question came from CBS reporter Ed O’Keefe, who asked Biden about a new poll showing Americans “no longer consider you to be competent, focused, or effective at the job.”

But even then, O’Keefe felt the need to go light on Biden, including in his question an apology, saying, “Forgive me, I’m just the messenger.”

So, how to explain this bifurcation of media attitude toward Biden? On one hand, they are willing to castigate him from afar when he tells blatant untruths, but on the other, they will not do so when given the opportunity to question him directly.

One theory on the tough media commentary is that they feel Biden has betrayed them: his embarrassing performance makes them look like fools for cheerleading for his candidacy and early presidency.

It’s my opinion that during the Democratic presidential primaries, many reporters favored other contestants, such as Sen. Bernie Sanders, I-Vt., or Sen. Elizabeth Warren, D-Mass. But when Biden became the Democratic nominee, he became their de facto candidate of choice.

The reporters who were with Biden during the campaign were well aware of his drawbacks, just as they knew of President Donald Trump’s campaign arguments that Biden was ill-prepared to lead the country.

Now that Biden is flailing, commentators who previously glossed over his flaws are more willing to lash out and be critical.

But what of reporters who demur when face-to-face with Biden—something they never did when Trump was at the podium?

The simplest explanation is that access is powerful leverage for the White House. Biden has been far less available than his predecessors to this point, and has not yet agreed to sit down for interviews with major outlets like The Washington Post, The New York Times, or The Wall Street Journal.

It is also readily apparent that Biden has a pre-scripted list of reporters he intends to call on during press events, sometimes even fumbling for a card to make sure he gets the names right. What’s unknown is whether these screened reporters are required to tell the White House communications staff the gist of their questions in advance.

Given this landscape, it seems obvious that making Biden look bad in a press conference is not a smart approach for reporters who want to continue to have access, hear their names called to ask questions, or be granted an audience in the Oval Office.

Further proof of this dynamic can be seen by comparing Biden’s Sunday press event with Monday’s appearance by Pentagon spokesman John Kirby.

On Sunday, Biden rattled off a series of numbers, indicating that the United States already has airlifted thousands of people out of harm’s way in Afghanistan. He did not say, nor was he asked, how many of them were Americans.

But by Monday, the press was ready for Kirby, and grilled him on the number of Americans who are still inside the collapsed nation.

By now, it ought to be dawning on the Biden White House that this is not like a campaign, and it can’t just protect the boss as much as possible and hope to ride out the bad news. But as long as reporters in the room are hesitant to vigorously question the leader of the free world, they will be tempted to continue the strategy.