A Shameful Attack on Conservatives for Supporting Afghan Women 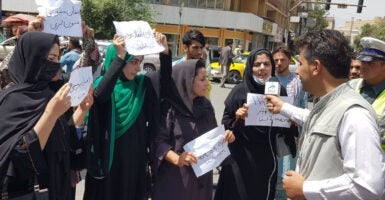 A liberal male columnist and comedian says that conservatives are unqualified to fight for the rights of Afghan women—because they don’t believe women are oppressed here.

“Afghan women’s rights are threatened—but the GOP isn’t their champion” was the headline Wednesday on Dean Obeidallah’s opinion column for MSNBC, as the world watched video of young Afghan women begging American forces to save them from the situation our president left them in.

In the column, Obeidallah writes:

Look, nobody is saying the GOP and the Taliban are equally bad. But in just the past few months, we’ve seen Republicans champion measures to deprive women of freedom over their own bodies, as well as oppose laws to protect women from violence and ensure that women are paid the same wages as men. And they’ve done so, at least in part, to impose their religious beliefs on all others.

While Obeidallah says Republicans and the Taliban, a terrorist group, aren’t “equally bad,” he apparently thinks they’re comparable. He goes on:

If the GOP wants to show that it is sincerely concerned with the rights of the women in Afghanistan, it can start by first championing the human rights of women in the U.S. But instead, it is doing all it can to prevent gender equality while oppressing women based on its members’ extreme religious beliefs. Sound familiar?

This is a farce. Conservatives know what true oppression looks like, which is why we don’t claim victimhood here.

We know the difference between inequalities as witnessed under Shariah law in Afghanistan and injustices that still occur in America today.

And unlike the left, which perpetuates falsehoods about sex, gender, equal pay, and life itself, the right also knows that embracing the West’s victimhood ideology is an affront to oppressed and victimized women in other cultures and nations, who would do anything to come here.

Women in the U.S. account for more than half of all voters, hold 57% of bachelor’s degrees, and in 2020 overtook men in the workforce. We have every freedom and opportunity imaginable, and pretending otherwise is a lie.

As we watch desperate Afghans fear for their lives, this reality shouldn’t be taken for granted. But instead of using this moment to express gratitude for all that American women enjoy, the left appears intent on perpetuating its false victimhood ideology—and worse, using it to undermine conservative support for Afghan women.

In his column, Obeidallah turns to Rep. Elise Stefanik, R-N.Y., a rising conservative leader who recently became chairwoman of the House Republican Conference.

Obeidallah notes that Stefanik “issued a statement Friday slamming President Joe Biden for, in her view, turning Afghanistan over to the Taliban, saying it threatens ‘the safety and security of the women of that country.’”

But when Stefanik had a chance to protect ‘the safety and security’ of America’s women, she also voted no on reauthorizing the Violence Against Women Act.

The Violence Against Women Act, originally passed in 1994, was designed to help victims of domestic violence. Since then, the law has undergone many changes in Congress, diverting it from the original goals.

The current version of the Violence Against Women Reauthorization Act, which Stefanik and others voted against, is more focused on expanding a progressive political agenda than delivering assistance, protection, and the right of self-defense to women facing domestic violence and sexual assault.

The text goes so far as to erase the term “violence against women” and replace it with “violence against adults [and] youth.” The version passed by the House would allow biological males to access and use female-only shelters for victims of domestic violence, putting the safety of women and girls in those shelters at risk.

In response to the left’s hijacking of what should have been a noncontroversial piece of legislation, Stefanik proposed passing a clean extension of program funding.

Of course, Obeidallah failed to mention this, or the fact that Senate Republicans introduced a version with stronger protections against the horrific act of female genital mutilation than was offered by Democrats.

Obeidallah, the lawyer son of a Palestinian father and an Italian mother, also takes issue with conservatives’ opposition to the left’s proposed Paycheck Fairness Act.

This legislation is not about securing equal pay for men and women, but about making virtually any differences in their pay—including those justified by factors such as education, experience, and hours of work—grounds for a lawsuit.

In making his case, Obeidallah repeats the misleading statistic that “women overall still get only 82 cents for each dollar paid to a man,” and concludes that “the GOP’s opposition to this is a blow to gender equality.”

According to the Bureau of Labor Statistics, however, the 82 cents figure doesn’t control for factors that significantly affect an employee’s pay,  including the number of hours worked, education, work title, industry, job skills, and specialization.

When controlling for these factors, the pay gap shrinks to just a few cents, which reflects the freedom that women have in the U.S. to make different choices about when and how much to work.

In advocating the Paycheck Fairness Act, proponents are sadly undermining women’s choice by forcing employers to offer one-size-fits-all jobs to avoid any gender pay discrepancies, which doesn’t reflect what many women want.

Worse, proponents are encouraging the freest, most prosperous, most privileged generation of women in the world to think of themselves as helpless victims of sexism in the workplace.

The last, and perhaps most significant, leg of Obeidallah’s attack on conservatives centers on the belief that life begins at conception. To make his case, he cites an influx of pro-life bills that have advanced in numerous Republican-led states.

“If the GOP wants to show that it is sincerely concerned with the rights of the women in Afghanistan, it can start by first championing the human rights of women in the U.S.,” Obeidallah writes. “But instead, it is doing all it can to prevent gender equality while oppressing women based on its members’ extreme religious beliefs. Sound familiar?”

The debate over when life begins is as much science-based as it is religious. Moreover, to equate the settling of this question—through a peaceful, democratic process—to a terrorist regime guided by Shariah law is fundamentally dishonest.

Hundreds if not thousands of Afghan women are risking their lives in an attempt to live in the supposedly misogynistic and oppressive United States, where difficult questions such as when life begins indeed may be settled through a peaceful, democratic process.

On the contrary, mothers in Afghanistan are so desperate to escape Taliban rule that they are throwing their babies over barbed wire at Kabul’s international airport, begging troops to save them from the Taliban.

To suggest that women have it bad here in America, or that conservatives impose their religious beliefs on women in a fashion similar to the Taliban, is an affront to the plight of Afghan women and a misrepresentation of democracy itself.

Thanks to President Joe Biden’s heartless decision to withdraw American troops from Afghanistan with hardly a plan of how to do so without endangering U.S. citizens, allies, and innocent Afghans alike, Afghan women need all the help they can get.

Now is not the time to undermine that support with partisan attacks based on legitimate policy disagreements for petty political gain, or for furthering false narratives about human rights in the United States.

Rather, now is the time to unite around doing all we can to salvage something from the horrific situation that our president left Afghan women and children to face. And to pray that some of them will live to see the freedoms that Americans are so lucky to enjoy here.