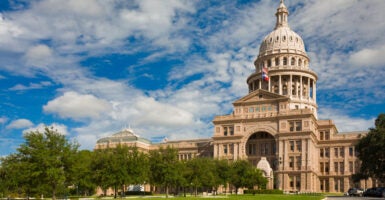 Nearly three dozen Texas Democrats in the state House “discreetly” left the Capitol “in the final hours of a regular legislative session in May” to prevent the Legislature from being able to vote, tanking Republicans’ election reform bill as a result. Pictured: the Texas Capitol in Austin. (Photo: dszc/Getty Images)

The Texas Supreme Court ruled Tuesday that the Texas Constitution authorizes the state’s House of Representatives to arrest members who flee in order to break the quorum required to vote.

The opinion states that “just as” Texas’ Constitution enables “‘quorum-breaking’ by a minority faction of the legislature, it likewise authorizes ‘quorum-forcing’ by the remaining members,” including by “arrest.”

“The legal question before this Court concerns only whether the Texas Constitution gives the House of Representatives the authority to physically compel the attendance of absent members. We conclude that it does, and we therefore direct the district court to withdraw the TRO,” wrote Justice Jimmy Blacklock on behalf of the state’s Supreme Court.

Nearly three dozen Texas Democrats in the state House “discreetly” left the Capitol “in the final hours of a regular legislative session in May” to prevent the Legislature from being able to vote, tanking Republicans’ election reform bill as a result. After Gov. Greg Abbott called a special session to pass the bill, members fled the state to Washington to urge Congress to pass federal voting legislation.

The Texas bill would prohibit some outdoor, drive-through, and 24-hour voting facilities and change some mail-in voting and ballot drop box rules.