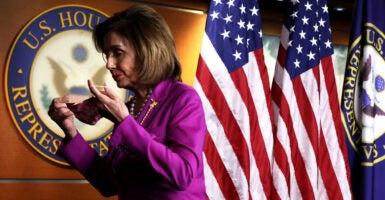 "While I applaud Republican representatives for challenging what clearly appears to be authoritarian, dictatorial behavior by Speaker Nancy Pelosi, I agree they will fail," Todd Miller writes. Pictured: Pelosi puts her mask back on as she leaves her weekly news conference July 28 at the Capitol. (Photo: Alex Wong/Getty Images)

Editor’s note: Judging from the mailbag at [email protected], The Daily Signal’s audience is wary that the Biden administration is leading the country toward stricter measures against COVID-19. Here’s a sampling.—Ken McIntyre

Dear Daily Signal: I find it incredibly interesting that American citizens basically are having their arms twisted behind their back to get a substance that hasn’t received full approval from the Food and Drug Administration injected into their arms (“Amid Union Pushback, Biden’s COVID-19 Vaccine Rules Face Legal Challenge Over Coercion”).

At the same time, illegal immigrants are pouring across our southern border, many of them infected with the virus, and are experiencing little to no repercussions.

We have charities dropping off illegal immigrants in various states and communities, and they don’t even inform the local authorities. This is yet another ringing example of a socialist, regressive double standard.

The people who are breaking the law by breaching our southern border without proper authorization and due process are afforded more rights than citizens of this country. Does anybody else see the inequity in this paradigm?

I know I’m probably beating the same drum as conservative commentators and pundits, but I’m going to do it anyway. It’s idiocy to call people stupid because they hesitate about having a substance injected into their arms that has not received full FDA sanction. Especially when well-respected scientists disagree about what these vaccines do and don’t do, as well as potential side effects.

Frankly, because of the lack of a longitudinal study, even the experts who support the vaccines can’t give a straight answer about long-term effects.

The best way of dealing with this is to encourage people to speak with their doctors. Another way is to provide, openly and honestly, all information that the government has about the virus and the vaccines; that way, people can make an informed decision.

Calling people’s intelligence into question only makes them more resistant. As a friend of mine once said, some people need to learn how to talk to people.—Eric Kielhorn, Norwich, Conn.

Forcing people to undertake a medical procedure is not the American way and is a clear civil rights violation no matter how proponents may seek to justify it.

Government set up the HIPAA laws for Americans for total privacy of our medical information, and now it wants to butt into our medical records? How does this work?

This whole COVID-19 vaccine situation is so odd. The vaccines are not even fully FDA-approved yet, and government talks to those who aren’t vaccinated like they have cooties. They are labeled not worthy of being called Americans. That’s just mean, and people are being bullied by the very people who are to protect them.

What right does any one person have to creep into another person’s personal medical records? It’s a medical decision that every American individual must make strictly with his or her own physician, to get the jab or not. This is the American way of doing things.

We have too many people being allowed over our open border from a zillion other countries who are carriers of COVID-19 that government doesn’t care about either. There are more important issues that this COVID shot to worry about.

We already have huge problems right now without being bullied into having the jab by some employer or government official.  I totally agree with Heritage Foundation senior fellow Doug Badger, quoted by Lucas, that they should stay out of it.—Lynda Nelson, Rochester, Minn.

The last sentence in Fred Lucas’ article, a quote from Heritage Foundation senior fellow Doug Badger, is almost hilarious: “They should take themselves out of it.”

The Biden administration could not do that and still remain who they are. There is no government control in taking themselves out of anything.

If the Biden administration had what seemed like total control, they still would not be satisfied because of the ones that would continue to resist.—Tom Chaplin, Crestwood, Ky.

I’m retired from a 40-year career in health system management. It was well known by all our doctors (regardless of the community or the physician’s personal political views) that union members in general, with teachers and government employees at the top of the list, were the most resistant to medical advice, especially regarding unhealthy personal behaviors. Yet union members also were the most hypochondriac and drug-seeking of all patient groups.

My wife, who was a nurse-practitioner, had the same experience as a health care provider.

Public employee unions, laziness, blaming others instead of taking personal responsibility. All are hallmarks of the Democratic Party.

It’s poetic justice that Biden and company are getting a taste of their own medicine (sarcasm intended).—Paul Levy, Carolina Beach, N.C.

Evidence “continues to mount of the long-term efficacy of natural immunity,” Tony Perkins writes (“To Follow the Science, Biden Administration Should Free the Science”). Yeah, that’s called “herd immunity,” as opposed to the temporary “immunity” (if any) that vaccines provide.

We need herd immunity, but will never achieve it so long as our glorious leaders are infatuated with vaccines. (I’ve had the Johnson & Johnson vaccine, which I now need a booster for to include the delta variant.) One has to wonder if all the new calls for vaccines aren’t simply the product of a plan to give Big Pharma at least two bites at the apple, getting paid off for both.—Morgan Spector, Lancaster, Calif.

Telling people they are stupid for not getting a COVID-19 vaccine, like President Biden does, is not helping the situation .

My son asks, “What were you saying?” We need the only thing we have: prayer.—Mary Archer, Middleburg, Fla.

Dear Daily Signal: Thank you once again, with GianCarlo Canaparo’s commentary, for being the arbiters of honest intel and analysis (“Representatives Go on Offensive Against Pelosi’s Mask Rule. Will It Work?”).

Our Constitution, Bill of Rights, and Declaration of Independence were written with very specific words, conveying very specific meaning, for very specific reasons. Sadly, our elected leaders and Supreme Court over many years have strayed from these perspectives.

While I applaud these Republican representatives for challenging what clearly appears to be authoritarian, dictatorial behavior by Speaker Nancy Pelosi, I agree they will fail.

I do thank them for trying. It’s better than the vast majority have done for quite some time.—Todd Miller, California

The article arguing the invalidity of applying the 27th Amendment to the tyrannical rule of the House’s Democrat leadership on wearing masks (a taste of communist Cuba) is an article that I as a conservative and Trump supporter do not care to read.

What I need from The Heritage Foundation is what has to happen here in order to thwart the House rule on masks. You need to provide avenues to fight the tyranny.

If all members of the Republican Party were to stage civil disobedience by not wearing a mask at all, it would be effective.

It would negate the rule. The rub here is that the Republicans in Congress are not unified as the Democrats are, and that always will result in divide and conquer.—Ananta Gopalan, Bluffton, S.C.

Dear Daily Signal: Regarding Fred Lucas’ report on Texas Democrats going to Washington to avoid a vote on election reform legislation, while it is important to know the “potential costs” of their action, it is far more important to me to know the cost to their careers (“What to Know About How Those ‘Fugitive’ Texas Democrats Will Pay for Stay in DC”).

This has been unacceptable behavior. I am far more interested in what punishment these defectors face upon returning to Texas. What is the governor doing, what is the rest of the state Legislature doing?

This behavior, if left unchecked, will set a dangerous precedent in dangerous times for voting rights. At this point, these Democrats should have no jobs to return to. Gov. Greg Abbott needs to declare emergency legislation to allow the state to proceed with whatever is on the floor.

In the meantime, the governor should initiate an emergency statewide election to replace the defectors. Without severe punishment, they and others will use this tactic across the nation to hold states hostage over something they disagree with.

Is there anything that can be done on a federal level to arrest these fugitives? After all, their crimes have led them to cross state lines.—Charles Williams

Why doesn’t the state of Texas withhold the Democrat legislators’ per diem payments until they return to their jobs?

The average employee wouldn’t get paid if he or she wasn’t doing the job. In fact, Texas should demand that the state Democrats repay any monies they have received while they’ve been wasting time in Washington, D.C.—Thomas Ward, Minden, Nev.

Dear Daily Signal: Isn’t it just like leftist socialist Democrats to discount a federal grand jury subpoena and immunity for testifying in an ecoterrorism incident, yet we can’t learn the name of the police officer who killed the only person who died in the Jan. 6 demonstration on Capitol Hill (“Biden Nominee Wins Only Democrats on Senate Panel Amid Tree-Spiking Scandal”).

It is apparent is that leftist socialist Democrats will turn a blind eye to events that happened in Tracy Stone-Manning’s early life, yet will pursue the impeachment of a sitting Supreme Court judge (“Senate Democrats, Slamming FBI, Seek to Revive Kavanaugh Sexual Assault Allegations”).

Senate Democrats are doing that even though the judge was investigated and found to be innocent of all charges in events falsely generated about his actions as a teenager.—Roy Christoffel, Pearland, Texas

I have been watching this Biden-Pelosi-Schumer fiasco of spending and printing money to get whatever they want without a care to the little man.

It reminds me very much that we are headed to the same socialism as seen in a 2013 movie called “Snowpiercer,” where the wealthy have all and the poor suffer in the dark.