Don’t Be Fooled by Charm Campaign: Biden Administration Must Hold Line on Huawei 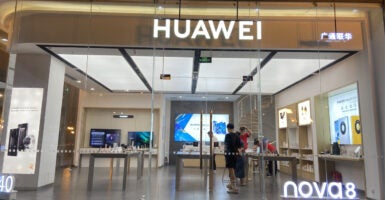 The Chinese telecom giant Huawei has ramped up its lobbying efforts to woo the Biden administration. Pictured: A view of a Huawei store in Wuhan, capital of central China's Hubei province, on July 19. (Photo: Costfoto/Barcroft Media/Getty Images)

Among Huawei’s increased lobbying activities in the U.S. is the hiring of longtime Washington lobbyist Tony Podesta. It’s senior vice president, Vincent Peng, even penned a column in the Japanese-based publication Nikkei Asia, titled “Huawei to Joe Biden: Let’s Talk,” in which he implored the administration to engage with Huawei.

The fact of the matter is that Huawei continues to pose a significant national security threat to the U.S. and its allies.

Despite Huawei’s claims to the contrary, it maintains extensive ties to the Chinese government. Huawei benefits from massive Chinese government subsidies and low-interest loans, which Chinese state banks provide to other countries to use the company’s telecom equipment. In addition, Huawei has worked closely with China’s military, the People’s Liberation Army, on high-tech research projects.

Under Chinese law, Huawei would be required to assist the country’s intelligence and security services if asked to do so. Article 14 of China’s 2017 National Intelligence Law stipulates that “the state intelligence work organization shall carry out intelligence work according to law, and may require relevant organs, organizations and citizens to provide necessary support, assistance and cooperation.”

Article 7 of the same law ominously states that “any organization or citizen shall support, assist and cooperate with the state intelligence work in accordance with the law.” This law essentially forces supposedly private Chinese companies such as Huawei to act as data-collecting arms of the Chinese Communist Party.

The equipment and products offered by Huawei have also been shown to contain vulnerabilities that can be exploited for nefarious purposes. In February 2020, The Wall Street Journal reported that the U.S. was in possession of intelligence showing that Huawei equipment allows the company to maintain unauthorized access to mobile phone networks.

Huawei has also shown a complete disregard for the laws of other nations. In January 2019, the Department of Justice unsealed an indictment against Huawei and its chief financial officer, Meng Wanzhou, for bank fraud and violating U.S. sanctions against Iran.

In February 2020, Huawei was indicted in the Eastern District of New York on charges of racketeering and conspiracy to steal trade secrets. This indictment alleged in part that Huawei engaged in intellectual property theft against six U.S. technology companies, and detailed Huawei’s business activities in both North Korea and Iran.

The threat posed by Huawei led the Trump administration to crack down on the company. In May 2019, Huawei was added to the Commerce Department’s Entity List. This listing prohibited American companies from conducting business with Huawei without a Commerce Department license.

The Trump administration ratcheted up the pressure against Huawei last summer, when it imposed restrictions that inhibited the company’s ability to procure advanced semiconductors.

Further, the Trump administration sought to get U.S. allies and partners to ban Huawei.

More and more nations have begun to recognize the inherent risks associated with using Huawei products, and have responded accordingly. Last year, Sweden and the U.K. banned Huawei 5G equipment from their telecom networks, and France imposed significant restrictions on Huawei that will essentially result in the company’s equipment being phased out of French networks by the end of the decade.

Germany, which had previously resisted U.S. entreaties to take action against Huawei, passed legislation this spring that restricts “untrustworthy” 5G suppliers from the country’s telecom networks.

And as of January 2021, 60 countries and over 200 telecom companies signed onto the U.S.’ Clean Network initiative, committing to using 5G technology supplied by trusted vendors.

These developments have severely damaged Huawei. Under the weight of U.S. export restrictions, the company suffered its first year-over-year revenue loss in the fourth quarter of 2020. Outside of China, the company also lost revenue and saw its telecom equipment market share decline in 2020.

The company’s smartphone sales have also tanked, and it was forced to sell its smartphone budget brand, Honor, at the end of last year.

The administration has also been pressuring the United Arab Emirates to remove Huawei equipment from its networks, and is working to expand outreach to developing countries to assist in the construction of 5G networks without technology from Chinese companies.

In the coming months, it is likely that powerful and connected lobbyists working on Huawei’s behalf will attempt to woo the Biden administration. The most solemn duty of any presidential administration is to protect American national security.

As such, the Biden administration must reject these lobbying efforts and hold the line on Huawei.