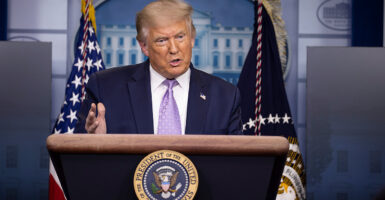 The president thrashed Huawei on Fox News’ “Fox & Friends,” telling the show’s hosts that Huawei spies on the United States and effectively had “free rein over our country.” Trump’s comments come as his administration is reportedly preparing to crack down on the company’s access to commercially available microchips, Reuters reported Monday, citing unnamed sources.

“Huawei is a disaster,” Trump said on Fox News, before suggesting the company spies on American citizens. “They used to have free rein over our country. They knew everything we were doing. Huawei is a way of really I call it the ‘spywei.’ What happens is Huawei comes out and they spy on our country.” Huawei denies that it spies on behalf of China.

The Commerce Department is applying more restrictions preventing Huawei from obtaining semiconductors without a special license, particularly foreign-made chips that have been developed or produced with U.S. software or technology, CNBC reported.

“Huawei and its affiliates have worked through third parties to harness U.S. technology in a manner that undermines U.S. national security and foreign policy interests,” Commerce Secretary Wilbur Ross said in a statement to Reuters. “[T]his multi-pronged action demonstrates our continuing commitment to impede Huawei’s ability to do so.”

The Trump administration added Huawei to an economic blacklist in May 2019. Monday’s planned order will add 38 Huawei affiliated in 21 countries, Reuters reported, raising the total to 152 affiliates. The company has not responded to The Daily Caller News Foundation’s request for comment.

The order requires all companies on the blacklist to obtain a license when a company like Huawei acts “as a purchaser, intermediate consignee, ultimate consignee, or end user,” the sources told Reuters. The additional Huawei entities now added to the list include cloud programs in Hong Kong, as well as ports in Paris, Berlin, Beijing, and Mexico, Reuters reported.

Trump targeted TikTok earlier this month. The president suggested Aug. 3 that he is amenable to the idea of Microsoft purchasing the upstart Chinese company, so long as the acquisition comes by Sept. 15. Twitter is also having talks about a potential combination with TikTok in the U.S., The Wall Street Journal reported Aug. 8.

Trump also signed a pair of executive orders Aug. 6 forbidding individuals from communicating with TikTok’s parent company, ByteDance. The president wants a slice of the profits from a potential sale to go to the United States Treasury. Government officials and lawmakers believe the app is a threat to national security through its collection of user data.

U.S. officials have so far not revealed direct evidence that TikTok is providing personal user data to the Chinese Communist Party.