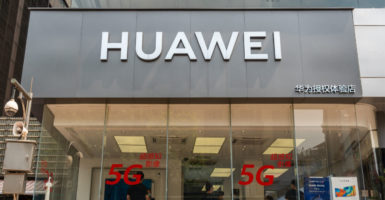 As a multinational conglomerate with branches and subsidiaries operating globally, Huawei also poses a challenge to various other U.S. economic and political policies beyond those in the cyber domain. Pictured: People stand inside a Huawei authorized experience store on May 28, 2020, in Shanghai, China. (Photo: Wang Gang/VCG/Getty Images)

Canadian courts on May 27 cleared the first hurdle for the transfer of Meng Wanzhou, the chief financial officer of Huawei, to the United States.

Meng is alleged to have informed various banks that Skycom Tech was an independent company, rather than a subsidiary of Huawei. That was intended to facilitate its access to international banks for financing various Skycom activities. At the time, Skycom was operating in Iran, and such access would have been a violation of U.S. sanctions against Iran.

That’s the basis for the bank fraud charges leveled against Meng. The argument for extradition to the U.S. rests on charges of bank fraud, rather than sanctions violations per se.

While this news was more about the legal issues surrounding Meng’s detention (specifically, whether her alleged actions constituted a crime under Canadian law in 2018), her alleged actions highlight the reality that U.S. problems with Huawei are not solely about cyberespionage or insecure telecommunications equipment.

As a multinational conglomerate with branches and subsidiaries operating globally, Huawei also poses a challenge to various other U.S. economic and political policies beyond those in the cyber domain.

Similarly, China’s reaction to the detention of Meng underscores the reality that China’s norms would create a very different international order than the current one.

Although Huawei is not a state-owned enterprise, soon after Meng’s detention, the Chinese detained a score of Canadian citizens, including former diplomat Michael Kovrig in late 2018.

Kovrig has not been allowed to see a lawyer or his family, but has also not been charged with any crimes. His detention and isolation are in violation of most norms of international behavior.

By contrast, Meng has had legal representation and, while placed under house arrest, has hardly been isolated. As important, she has been kept aware of the charges against her.

With the British Columbia court’s decision, it’s likely that Canadians and Americans alike will face additional risks of arbitrary detention by the Chinese authorities in retaliation.

Chinese actions are a direct challenge to the entire concept of the rule of law, which in turn underpins the international rules-based system.

Washington and Ottawa, along with other Western nations, need to coordinate their responses and make clear that any such actions by Beijing are unacceptable.