Why States Should Tune Out Washington’s COVID-19 Noise 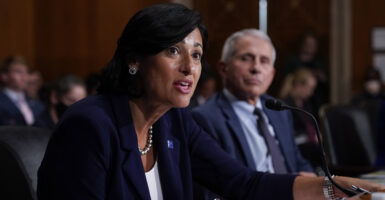 The federal government continues to offer garbled COVID-19 messages that undermine its credibility and sow confusion about the pandemic.

The Centers for Disease Control and Prevention now thinks there are more infections among the vaccinated than it did previously (35,000 weekly with symptomatic infections) and suggests that vaccinated people are helping spread what President Joe Biden calls a “pandemic of the unvaccinated.”

Biden, meanwhile, continues his unsuccessful vax-“shaming” campaign. He says that unvaccinated people “aren’t nearly as smart as I thought” and alleges that they “get sick and fill up our hospitals,” denying medical care to heart attack victims.

The administration’s vaccine campaign also has turned to coercion. The CDC director has voiced support for “vaccine passports,” which deny the unvaccinated access to public venues. The president has ordered unvaccinated federal employees and contractors to submit to frequent testing and workplace restrictions from which their vaccinated colleagues are exempt.

Washington’s frenetic and ineffectual reaction to the most recent run-up in cases points up the virtues of constitutional federalism, a decentralized approach that defers policy decisions to states and localities.

“When our collective fate relies on speed, efficiency, and unity,” a Journal of the American Medical Association editorial reads, “federalist ideals fall flat.”

“Divided gov­ernment creates unnecessary challenges for residents of states that are too slow to act or take up federal policies,” it claims.

The Bipartisan Policy Center laments the “patchwork of state responses” and says it’s “vital for states and localities to follow federal evidence-based guidelines.”

A recent analysis of the public policy response to COVID-19 co-authored with my Heritage Foundation colleague Robert Moffitt reached the opposite conclusion. It finds that the country benefited from policies adapted to the varied conditions of states and localities, a principal virtue of federalism. (The Daily Signal is the news outlet of The Heritage Foundation.)

Advocates of centralized decision-making assume that federal policymakers formulate consistently sound, evidence-based policies. The corollary is that states that deviate from those policies will fare worse than states that adhere to them.

We found both suppositions false.

The CDC made repeated errors in judgment; issued policies that were often unclear, misguided, and not evidence-based; and made recommendations that too often yielded few, if any, public health benefits while inflicting social and economic damage.

Our look at the four most populous states (California, Texas, Florida, and New York) found that the two that spurned CDC-favored policies (Florida and Texas) had comparable or better public health outcomes and far better economic outcomes than the two (California and New York) that closely followed federal agency guidelines.

With a new run-up in cases, it’s vitally important that states strike appropriate policy courses and not accept the CDC’s spasmodic policy declarations at face value.

They should begin by avoiding the CDC’s obsession with case counts.

While higher confirmed case rates raise concerns, they don’t carry the same implications as previous spikes. Unlike last winter’s case surge, vaccination rates among those most susceptible to severe illness and death are high. According to the CDC, 80% of the elderly are fully immunized, and 90% have had at least one shot.

State and local public health officials should instead focus on hospitalizations and deaths.

The experience in the United Kingdom is instructive. Its spike in cases began in late May and only started to subside in late July. But while its seven-day moving average of newly confirmed cases peaked at 703 per million on July 21—not far from the record number of new infections that the U.S. recorded in January—COVID-19-related death rates in the U.K. increased only modestly.

As of July 27, they were around one per million residents, similar to the U.S., and a fraction of the 18.46 deaths per million rate the U.K. endured last winter.

The U.K. demonstrates that case counts can rise in a population with significant vaccination rates without producing nearly the devastation of earlier waves of infection.

State and local policymakers should base policy on more relevant measures of pandemic severity, such as hospitalization and death rates.

That would facilitate more intelligent and tolerant approaches toward people who are reluctant to get the vaccine—approaches based on respect, not on condescension.

Instead of smearing unvaccinated people as menaces to society, states can stress that vaccines protect individuals against the worst consequences of COVID-19 even if they don’t always prevent infection.

States should also encourage people to listen to their doctors—not their Twitter feeds—when deciding whether to get immunized.

It will be hard for state officials to make themselves heard above the Washington noise, but people will more likely respond favorably to rational and balanced messaging than to insults, coercion, and contradictory messages.