Declining US Birthrate Another Reason to Rein in Federal Spending 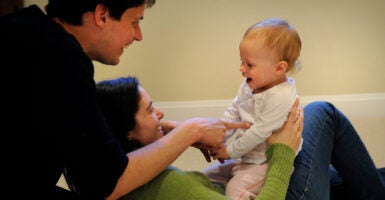 Initially, COVID-19 lockdowns were projected to produce a baby boom, but what ensued instead was a baby bust.

According to the Centers for Disease Control and Prevention, 2020 marked a record-low fertility rate of 1.64 children per woman and the sixth straight year with an outright decline in the number of births.

A fertility rate of 2.1 is needed to maintain a stable population.

The pandemic and all its uncertainty likely contributed to the 2020 decline, but birthrates were already declining well before the COVID-19 pandemic.

As steep as the decline is in U.S. births, the increase in U.S. debt has been even more dramatic.

That creates a double whammy for today’s young and yet-to-be-born generations; namely, fewer people left to pick up a higher tab.

If fertility rates remain low, each American’s share of the national debt will continue to rise even if policymakers miraculously decide to limit spending to the revenues they collect.

But responsible kitchen-table budgeting that ordinary Americans confront each day is anathema to politicians in Washington.

If the typical American household budgeted like the federal government, they would be making $63,179 each year, while spending $75,423 and putting $12,244 on the credit card—and that was before policymakers’ COVID-19 economic responses equated to putting $62,917 on the family credit card in 2020 alone. And that doesn’t account for the $6.4 trillion tax-and-spend agenda being pushed by the Biden administration and liberal members of Congress.

Already insolvent entitlement programs are shifting incomes and resources away from younger workers to older ones.

America has enough unfunded entitlement programs. Before politicians consider adding new entitlements for everything from paid family leave to child care to community college, they should first fix what’s broken.

The best way to help young and future generations is to not saddle them with six figures of debt from the day they are born.

People don’t have children because politicians pay them to do so.

And they should support children by not saddling them with reckless amounts of debt, effectively requiring them to finance their own upbringing.