Some No-Cost Ways for Congress to Make Pentagon More Effective 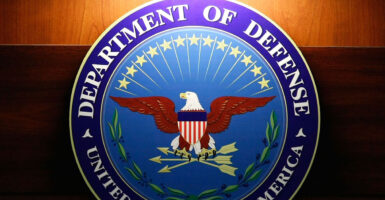 The “use it or lose it” phenomenon occurs at the end of every fiscal year, when the Defense Department rushes to spend remaining dollars before its budget expires. (Photo: Mark Wilson/Getty Images)

Kaitlyn Romaine is a student at the College of the Holy Cross and a member of the Young Leaders Program in the Center for National Defense at The Heritage Foundation.

It is easy to complain, much harder to offer solutions.

Congress loves to criticize the Pentagon’s wastefulness, even though lawmakers create some waste by imposing overly prescriptive rules such as “use it or lose it.”

The “use it or lose it” phenomenon occurs at the end of every fiscal year, when the Defense Department rushes to spend remaining dollars before the budget expires. Thus, “use” the money within the set timeframe, Pentagon, or else you’ll “lose it.”

This last-minute spending often results in bad deals, which has led to criticism from both political parties.

Sens. Chuck Grassley, R-Iowa; Ron Wyden, D-Ore.; and Mike Lee, R-Utah, are among the most vocal about the Pentagon’s spending practices. And Sen. Bernie Sanders, I-Vt., routinely accuses the Pentagon of “enormous amounts of waste and financial mismanagement.”

But although Congress finds plenty to criticize about Defense Department spending, it comes up short in offering solutions to help the Pentagon actually be more efficient.

The “use it or lose it” situation is especially acute with money that is good for only one year, such as operations and maintenance funds—which make up over 40% of the defense budget.

The period of time in which Pentagon officials may spend these funds often is cut even shorter than a year when appropriations don’t arrive on time—which happens dismayingly frequently—and Congress must pass what it calls a continuing resolution.

Congress also has created artificial deadlines that exacerbate the problem. One of these deadlines is the infamous “80/20 rule,” which requires 80% of the defense budget to be spent before the end of July.

This deadline, combined with the regular cadence of the fiscal year, pushes the Defense Department toward higher levels of spending in July and in September, the last month of the federal government’s fiscal year.

Fortunately, Congress can take two steps to help remedy this problem. And unlike some other proposals, they don’t cost any money to implement.

First, Congress should allow some money to be carried over from one fiscal year to the next. The Heritage Foundation proposes 5% of the budget, to give the Pentagon increased flexibility and room for better decision-making and planning. (The Daily Signal is Heritage’s multimedia news organization.)

This is not a new concept for federal spending. The Department of Homeland Security and other agencies have this authority. The 5% carryover should serve as a trial so it can be periodically evaluated and adjusted, based on actual use and financial impacts.

Second, Congress should test ways to relax the 80/20 rule described above. When lawmakers created the rule, the goal was to soften the end-of-the-year spike in spending. However, the rule mostly has served to create yet another spending deadline.

The overall goal of tackling “use it or lose it” is to ensure the Defense Department makes spending decisions based on merit rather than for the sake of spending—not to completely smooth out spending of the defense budget.

Congress should use these two suggestions as starting points to evaluate Pentagon spending patterns and whether the changes result in better behavior. These are simple tweaks to appropriations legislation that could incentivize good decision-making.

Lastly, the phenomenon of “use it or lose it” isn’t exclusive to the Pentagon nor to the federal government. Rather, the practice affects most government institutions that run on annual appropriations.

If the Defense Department can demonstrate that these solutions work, it can serve as a role model for other government institutions.

By reevaluating budget restrictions that partially create “use it or lose it,” Congress would move toward a more intentional use of taxpayer dollars, a stronger national defense, and a more efficient Defense Department. All of these should be a priority for every lawmaker.

Congress has nothing to lose by trying out these solutions.