What Leftists Overlook About Cuba 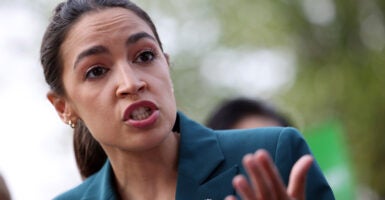 While making an obligatory defense of "human rights" and "free speech," Rep. Alexandria Ocasio-Cortez, pictured outside the U.S. Capitol on July 20, blamed Cuba's deplorable economic condition, not on communism or socialism, but on America's "cruel" embargo. (Photo: Kevin Dietsch/Getty Images)

People on the far left have become so predictable that their statements are no longer “breaking news.” They would be hilarious if they weren’t outrageous or if they didn’t contribute to the undermining of human rights and freedom in other countries.

Some on the left speak favorably about the evil twins of communism and socialism.

One of many examples has resurfaced after the recent uprising in Cuba by thousands who have demanded freedom from dictatorship.

Nikole Hannah-Jones, author of the 1619 Project, which seeks to teach history to public school students through the prism of slavery, said in a 2019 podcast that she believes Cuba is the most equal country in the Western Hemisphere and might serve as a model for her project’s integration agenda.

While acknowledging she is not an expert on race, Hannah-Jones said she believes Cuba is the most “equal” and “multiracial” country in the hemisphere, which she attributed to socialism.

Such numbers do not deter communism’s enablers.

Rep. Alexandria Ocasio-Cortez, D-N.Y., did not disappoint with her own predictable response to the demonstrations in Cuba. While making an obligatory defense of “human rights” and “free speech,” she blamed Cuba’s deplorable economic condition, not on communism or socialism, but on America’s “cruel” embargo, which she said has caused “human suffering.”

Cuba trades with much of the rest of the world, so the island’s problems can’t be all, or even mostly, America’s fault.

Should human suffering not include the number of people imprisoned by Castro and his successors? As one might expect, Cuba does not publish information about the number of humans suffering in its prisons, but in 2012, Reuters reported that Cuban authorities acknowledged 57, 337 of its 11.2 million population were incarcerated. The Cuban Prisoners Defenders group, based in Madrid, estimates the number is far higher—123,000, which would make it first in the global ranking of prison populations per capita.

For years the Hollywood left, liberal clergy, and some American politicians have touted the supposed greatness of Cuba’s literacy program and “free” health care.

Steven G. Ullman, a School of Business Administration professor and chair of the Department of Health Sector Management and Policy at the University of Miami, told UM News that while universal health care in Cuba may have been a good idea in theory, in practice it is a failure:

… the doctors and nurses have very few supplies, including antibiotics, with which to treat patients, so prevention and treatment become problematic. That’s in addition to a lack of potable water. There is a significant shortage of supplies in the most populated rural areas. For example, clinics now require patients to bring their own bedding and food. There is a deterioration in sterilizing processes, reusing syringes, issues associated with old X-ray machines, no film available. With this breakdown, the theoretical concept has also fallen apart.

As for literacy, how does it help if all Cubans can read if all they’re allowed to read is communist propaganda?

If the Biden administration and its leftist friends truly care about human suffering, the least they can do is use technology to reopen internet access in Cuba, which the government shut down during the demonstrations. Words are not enough. “Cuba libre!” should be more than a slogan. It should be American policy.