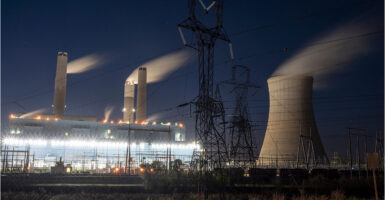 President Joe Biden has made it the policy of his administration to decarbonize the electricity sector fully by 2035 and to reach economy-wide net zero emissions by 2050. Pictured: Steam rises from the Miller coal power plant in Adamsville, Alabama, April 11. (Photo: Andrew Caballero-Reynolds/AFP/Getty Images)

President Joe Biden has made it the policy of his administration to decarbonize the electricity sector fully by 2035 and to reach economy-wide net zero emissions by 2050.

The trouble is, it’s very hard for a president to unilaterally require hundreds of millions of American businesses, industries, and energy users to comply without a law from Congress or running afoul of the Supreme Court (pesky checks and balances!).

While the Biden administration frequently refers to these as “our target,” the peoples’ representatives in Congress haven’t yet obliged. And for good reason—the president’s target promises to totally redefine the economy and presumes that producing and using energy is something the government should own or manage instead of the freewill exchange between businesses and customers who have unique needs, preferences, and choices.

Enter liberal Democrats who are trying to push the president’s climate policies through a rushed process of self-imposed crisis to pass a $3.5 trillion budget package riding on the good graces of a tenuously bipartisan $1.2 trillion infrastructure bill. The main tools being considered are a clean electricity standard and a carbon border adjustment tax.

The details of each can vary quite a bit, but here’s the general idea:

The Obama administration’s Clean Power Plan was a regulatory attempt to achieve a clean electricity standard that raised serious questions at the Supreme Court, was reworked under the Trump administration, and is now in legal limbo under the Biden administration.

The general idea is to tax, add fees, or levy a tariff on commodities and products that emit carbon dioxide themselves (like natural gas, coal, and oil) and/or emit carbon dioxide when being manufactured (like steel and concrete). In reality, most goods and services use energy that emits carbon dioxide at some point in their production, delivery, use, or disposal.

Why the Push Now?

Both policies are suddenly getting a lot of attention in Congress for at least two reasons. First, liberal Democrats are hoping to use the massive “must pass” budget bill and the infrastructure bill as vehicles to pass these politically unpopular policies.

But secondly, liberal Democrats need cold hard cash to pay for the trillions in new spending in order to appease moderate Democrats who have the audacity to maintain that Congress should be able to pay for new spending. Coons and Peters expect their carbon border adjustment fee would bring in $5 billion to $16 billion per year.

The incredible thing is, the details of these economy-altering policies are still unknown and haven’t been debated in Congress. Even so, Senate Majority Leader Chuck Schumer, D-N.Y., defended his hurried deadline to begin voting on the infrastructure package, saying it “is simply about getting the legislative process started here on the Senate floor. It is not a deadline to determine every final little detail of the bill.”

But those details matter and should be debated, not rushed.

The ramifications of these policies are economy-wide (not to mention their many other pitfalls). While the details perhaps change the magnitude of impacts or the constitutional implications for states, the direction of these policies is generally the same: expensive.

For example, Heritage Foundation estimates of the Green New Deal’s economic impact totaled over $15 trillion in lost gross domestic product by 2040, with millions of job losses and costs of over $8,000 per year for a family of four. (The Daily Signal is the news and commentary outlet of The Heritage Foundation.)

Because these policies increase the cost of energy, they increase the costs of basically every good and service we engage in across the economy, even outside of what we immediately think of as “energy.”

As noted by Joseph Sternberg in a recent Wall Street Journal piece that tracked similar policies in France, Japan, Switzerland, the U.K., and European Union, voters in a startlingly broad phenomenon spanning continents “have started noticing how much they’re each going to have to spend to reduce carbon emissions, and they don’t like it.”

The sad thing is, Americans won’t notice the environmental impacts even if these policies were carried out to perfection, regardless of what one thinks about projections of warming by U.N. climate models.

John Kerry, U.S. special presidential envoy for climate, has noted several times in the past that “if all the industrial nations went down to zero emissions … it wouldn’t be enough.” According to the International Energy Agency, developing and emerging economies contribute more than two-thirds of global carbon dioxide emissions.

It would be far better if Americans and their representatives noticed how much these policies could cost them before laws are passed and they start noticing them for the first time on their electricity bills, at the gas pump, and in the store.