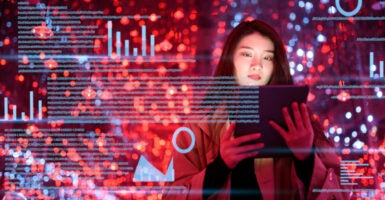 Randolph J. May is president of the Free State Foundation, a think tank in Rockville, Maryland.

Seth Cooper is a senior fellow at the Free State Foundation, a think tank in Rockville, Maryland.

Faced with rising inflation and trillion-dollar federal budget deficits, more and more Americans understandably are wary of Congress’ passing any new, massive infrastructure spending bills. This is especially so when “infrastructure” is defined so loosely as to encompass all manner of spending on social welfare programs.

But there’s one sure way to promote real infrastructure buildouts that will lift our economy and help check China’s goal of high-tech dominance—without costing taxpayers a dime.

Congress promptly should adopt legislation such as the proposed American Broadband Act, introduced May 20 by Republican members of the House Energy and Commerce Committee.

The American Broadband Act would eliminate unreasonable restrictions and excessive fees that many localities impose before granting rights-of-way access and construction permits for towers and antennas. In turn, this would facilitate construction of next-generation 5G broadband networks, a spur to American investment and high-paying jobs.

Congressional action would help secure American leadership in deploying 5G technology in the face of China’s determined effort to wrest away that leadership.

Built in a timely fashion, 5G networks would add $1.4 trillion to $1.7 trillion to America’s gross domestic product over the next 10 years, according to the Boston Consulting Group.

And 5G deployment would help create 3.8 million to 4.6 million American jobs. This stunning growth would come primarily from manufacturing, construction, health care, agriculture, and other industries that will use 5G technologies.

The Federal Communications Commission has compiled considerable evidence regarding local governments’ misuse of their zoning, rights-of-way, and permitting powers to slow or stop new construction and infrastructure upgrades. The Communications Act already prohibits local governments from taking actions that have the “effect of prohibiting” the offering of wireless services.

Nevertheless, the FCC has documented instances in which localities evaded the law by imposing excessively high permit fees or multiple time-consuming meetings, certifications, and other paperwork requirements on wireless infrastructure providers.

In September 2018, the FCC issued rules clarifying what types of local laws or actions constitute “effective prohibitions” on infrastructure siting. It provided additional clarifications in June and October 2020.

Although these efforts have helped prevent local permitting roadblocks to wireless infrastructure, the agency’s reforms could be reversed by a mere majority vote of the five-member commission.

Local governments continue to lobby for repeal of the agency’s rules. Because the acting FCC chairwoman, a Democrat, opposed significant aspects of the FCC’s actions, there is a real risk that a newly reconstituted commission could accede to that local pressure.

Were that to happen, imposition of local restrictions and high fees for granting infrastructure permits would slow 5G deployment, undermining billions in economic benefits and hundreds of thousands of new jobs.

The bill would establish “shot clocks” as windows within which local governments would be required to grant or deny permits to construct new wireless facilities (150 days) or to place wireless radios at existing locations (90 days). The legislation also would set shorter “shot clocks” for deciding applications for placement of small cell antennas, which the FCC has described as “pizza box-sized.”

A local government’s failure to act within the required timeframes would result in the permit being “deemed granted” under federal law. This would avoid the necessity that wireless infrastructure providers file costly lawsuits to overcome inaction by a local government.

Additionally, the bill would limit fees to the local government’s actual costs for processing a permit application. Moreover, the bill would exempt placement of small cell antennas from certain unnecessary historic and environmental reviews.

Congress should adopt legislation such as the American Broadband Act to ensure removal of local barriers to wireless infrastructure deployment—and stay removed. Doing so would allow America’s private wireless providers to continue to invest their own capital to bring advanced 5G services to consumers and businesses.

Such action by Congress also would provide an opportunity for America’s own entrepreneurs to maintain the nation’s leadership in a key area of high tech amid China’s determined challenge.