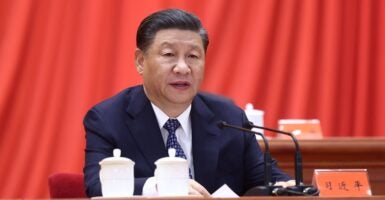 The COVID-19 pandemic illustrates why a lack of knowledge about China’s problems can become the world’s problems, says Rep. Steve Chabot, regarding one of the world’s most powerful, yet also most secretive and oppressive regimes.

“No one fully understands what is happening in China. On the one hand, China seems to be an unstoppable juggernaut posing an existential threat to peace and freedom throughout Asia and the Pacific region,” Chabot, R-Ohio, a member of the House Foreign Affairs Committee, said Friday at The Heritage Foundation, at an event previewing the release next week of Heritage’s “2021 China Transparency Report.”

On the other hand, they seem to be beset by internal problems like impending catastrophic debt and serious demographic challenges.

The problem is that so many of our military, economic, and business decisions depend on accurately judging China’s trajectory, intentions, capabilities, and more immediately, where they are investing and what they are doing.

The Heritage Foundation, the parent organization of The Daily Signal, will release its “2021 China Transparency Report” on June 30. The report uses data from dozens of open-source programs, from the Chinese Communist Party and government organs, as well as information obtained from private, nongovernmental entities.

Chabot noted Americans have an entirely different worldview on transparency than that of Chinese President Xi Jinping’s government and the Chinese Communist Party.

“We see openness as a virtue because in democratic societies, we derive our strength directly from the people, and they have a right to know what their representatives, like myself, are doing,” the Ohio lawmaker said, adding:

Chairman Xi and his CCP leadership cronies, on the other hand, derive their strength through division, oppression, and manipulation.

Consequently, there is no need for the CCP to communicate its activities to the people, which means it’s accountable to no one but itself.

China has pushed through influence operations abroad, including in the United States. It’s been particularly heavy at higher education institutions through Confucius Institutes, which some U.S. officials say function as a front group for the Chinese Communist Party on college campuses.

Another problem is the Thousand Talents Plan, a Chinese program that offers mainly Chinese scientists working overseas “lavish financial incentives” to bring their expertise and knowledge back to China.

The recruitment of researchers and professors and the use of students have been a problem as China targets U.S. universities, he added.

“We’ll talk about sending a lot of Chinese nationals to the U.S. on U.S. student visas and how they take advantage of those visas, what they do on those visas while they are here, and the knowledge transfer that they then send back to China on a variety of sensitive subjects,” Wolf said, adding:

I think we need to take a closer, harder look at that. We started doing that under the Trump administration. Hopefully, that will continue.

But I think it’s critically important we make sure the thousands and thousands of student visas that we issue to Chinese nationals to come over here to study, they need to be better checked, screened and vetted, and we need to periodically check up on them.

Higher education institutions in the United States should also be more transparent as it relates to China, Wolf said.

“There are a lot of universities and colleges out there that are willing to accept a lot of funding from the Chinese government and Chinese-backed institutions without disclosing, without making it apparent: What is that relationship? What does that relationship entail?” he said.

The United States and much of the rest of the world have tried to gain more information to understand the crisis in Xinjiang, where ethnic Uighurs are being persecuted. Satellite imagery analysis and the mining of Chinese government-produced data have provided information. There have also been firsthand and victim-centered accounts that contribute to understanding the situation.

China has increasingly blocked access to military-related publications, even books written by military generals once available in bookstores in China.

The Chinese Communist Party discourages analysis of Chinese politics by reducing access to Chinese databases and by discouraging or even harassing foreign academics, scholars, journalists, and institutions from analyzing sensitive topics.

Other aspects that should be evaluated include political interaction among chief executives of state-owned enterprises and the national political leadership, according to highlights of the upcoming Heritage report. Also, studies of provincial leadership trends would foreshadow the next generation of Chinese leaders.

Chinese statistics purportedly show what the central government ministries spend, but government statistics don’t include technology spending by the individual provinces, prefectures, or districts, according to the overview of the report. Moreover, the Chinese Communist Party doesn’t include a clear breakdown of the national government’s investment in public-private partnerships to steer technology research, development, and commercialization, such as Chinese Government Guidance Funds.

Chinese economic data is known for being unreliable because Beijing is known for corrupting statistics regarding gross domestic product, investment, and retail figures, according to the forthcoming Heritage report.

The Chinese regime cannot as easily manipulate outbound investment, or foreign direct investment statistics. The report suggests paying more attention to subregional-level analysis and how investments are affecting those subregions.

“We now have in a way that the Trump administration began, the Biden administration has taken forward a framework for looking at cross-border data issues in an interagency fashion that is led by the Commerce Department,” said David Feith, a former deputy assistant secretary of state for East Asian and Pacific Affairs, who also spoke at the event. “But the implementation of this hasn’t yet begun. It’s something that, in the hands of the Biden administration, has enormous implications for national and economic security.”

China has hidden environmental and industrial data, calling much of it “state secrets,” said Walter Lohman, the director of the Asian Studies Center at The Heritage Foundation, who hosted the event, adding:

Another area we look at is energy and environment. Actually, in the range of eight things, the Chinese are best at transparency [there], but it’s still not great.

They’ve hidden industrial projects and environmental costs under the guise of state secrets that you have no way of accessing. In fact, if you try as a Chinese citizen, you will probably find yourself under arrest.

If you try as an American reporter or a foreign reporter, you’ll find yourself escorted out of the country.