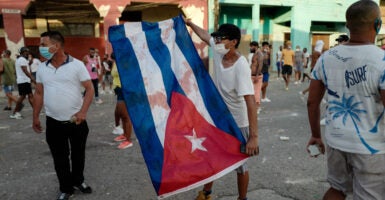 A man waves a Cuban flag during a demonstration against the communist government in Havana on Sunday, as thousands of Cubans took part in rare protests, marching and chanting "Down with the dictatorship!" and "We want liberty!" (Photo: Adalberto Roque/AFP/Getty Images)

Thousands of Cubans have taken to the streets, demanding greater economic freedom and an end to the country’s socialist dictatorship.

The rallies, quite notable for a country that limits and suppresses dissent, unambiguously stem from a deepening economic crisis, particularly worsened by the ongoing COVID-19 pandemic.

It’s not surprising that after decades of suffering from the failed ideologies of communism and socialism, the Cuban people are calling for liberty. And indeed, the protesters can be heard demanding “libertad.”

“This is no longer a question of freedom of expression. It’s a question of hunger,” said Adonis Milan, a theater director in Havana, moments before he left his house to join the crowd massing in the city.

“People are hitting the street. They are asking for an end to this government, to one-party rule, to repression and the misery we have lived through for 60 years,” he said.

Cuba is badly in need not only of political reforms, but also of economic reforms that can generate greater opportunities for the people.

In December, the government said Cuba’s gross domestic product had shrunk by 11% since the start of 2020. As a matter of fact, the Cuban economy has been suffering for a long time from the lack of economic freedom.

Heavy state intervention has stifled innovation, and the state’s foreign-currency earnings are dependent on a few exports, such as nickel, along with tourism and health care.

According to The Heritage Foundation’s annual Index of Economic Freedom, a global benchmark report that measures the soundness of economic governance and the entrepreneurial environment in countries around the world, the Cuban economy is among the worst in the world, at the bottom of the repressed category since the inception of the index in 1995. Only two of Cuba’s 12 index indicators—monetary and trade components—have scores slightly above 50 (out of 100).

Sharp reductions in economic growth in recent years due to the lack of meaningful economic reform, an economic collapse in client state Venezuela, and the ongoing pandemic have forced the island’s regime to backtrack on a set of very timid measures that were aimed at partial liberalization. Thus, the 2021 index reports that Cuba’s economic freedom score is only 28.1, making its economy the 176th-freest out of 178 countries ranked, ahead of only Venezuela and North Korea.

A small number of limited reforms beginning in 2010 have allowed Cubans to work as “self-employed people” in the private sector, but currently they can work only in narrow categories defined by the state.

While a revised partial liberalization of the labor market was introduced early this year to allow private sector employment in almost 2,000 professions, reserving 124 of the most strategic activities for state involvement, the state—which spends more than 60% of the island’s economic output—has remained firmly in control of the private sector and the daily economic life of the Cuban people.

In a recent article, “Cuba’s new leadership will have to deliver results fast,” The Economist pointed out: “Younger Cubans are digitally connected and impatient with the socialist regime.” The article further noted:

Cuba’s communist regime has outlasted countless premature obituaries. A new, slightly younger leadership has seamlessly taken over, under the slogan ‘unity and continuity.’ Yet the fact that the party had to proclaim that nothing is changing suggests that beneath the surface it worries that things might. … The iron control of the Cuban police state is not immediately threatened. But frustration is growing.

What’s currently unfolding in the streets of Cuba is not something unforeseen. Cubans, particularly the young, are fed up with socialism, and they want to move away from it.