Why Democracy and Free Markets Are the Best Antidotes to Pandemics 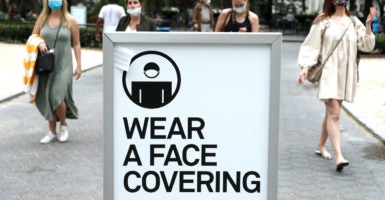 In a recent article, The Economist provided compelling evidence that “democracies contain epidemics most effectively.”

According to the article’s analysis,

… most data suggest that political freedom can be a tonic against disease. The Economist has [analyzed] epidemics from 1960 to 2019. Though these outbreaks varied in contagiousness and lethality, a clear correlation emerged. Among countries with similar wealth, the lowest death rates tend to be in places where most people can vote in free and fair elections. Other definitions of democracy give similar results.

Not surprisingly, societies with greater economic freedom through free-market policies also tend to have greater capacity to counter infectious diseases.

Fundamentally, a nation’s capacity to handle pandemics hinges on the quality of its institutions and economic systems, particularly given the positive linkage between economic freedom and health security capacities “to prevent, detect, and respond to significant disease outbreaks,” as defined by the Global Health Security Index.

As The Heritage Foundation’s annual Index of Economic Freedom reminds us, policies and governing systems that promote freedom—through improvements in the rule of law and transparency, the promotion of competition, and suitable restraints on the size and economic reach of government—turn out in practice to best provide practical solutions to the wide range of challenges that constantly confront the world.

By empowering people to exercise greater control of their daily lives, economic freedom ultimately nurtures political reform by making it possible for individuals to gain the economic resources that they can use to challenge entrenched interests or compete for political power, thereby encouraging the creation of more pluralistic and inclusive societies.

In an unprecedented period of uncertainty and anxiety, the world is witnessing how countries across the political and free-market spectrums respond to the pandemic and its adverse impact on their societies.

As this critical effort continues, it’s vital to preserve institutions and policies that advance good governance and economic freedom.

As The Heritage Foundation’s guiding principle reminds us,

America is strongest when our policies protect our national interests, preserve our alliances of free peoples, vigorously counter threats to our security, and advance prosperity through economic freedom at home and abroad.

It won’t be an easy task, but the American people have always risen to a challenge. Now is the time to take decisive and carefully targeted policy actions that uphold the rule of law and reignite economic dynamism to minimize the human cost of the coronavirus and ensure America’s accelerated economic rebound in the months ahead.