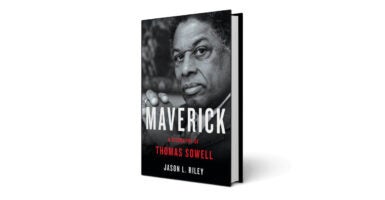 A onetime Marxist, economist Thomas Sowell came to his free-market beliefs by way of reflection and observation. But then again, so did two of his mentors, Milton Friedman and George Stigler, who both spoke of having liberal political inclinations in their own student days.

The following is the second of three excerpts from Jason Riley’s new book “Maverick: A Biography of Thomas Sowell,” about the iconoclastic economist. The book is available here.

The original plan was to pursue his doctorate at Columbia University, where he had just earned his master’s degree, and to study under another future Nobel economist, George Stigler.

As an undergraduate at Harvard in a course on the history of economic thought, Sowell had read an academic article by Stigler on the theories of the classical economist David Ricardo. Sowell was so taken by the subject matter, and so impressed by Stigler’s command of it, that he turned his own focus toward the history of ideas and resolved to do his graduate work at Columbia under Stigler’s guidance.

After Stigler left Columbia in 1958 to join the faculty of the University of Chicago, Sowell followed him there.

Friedman and Stigler were hardly the only scholars of future renown that Sowell was exposed to in his student days. His professors also included Gary Becker and Friedrich Hayek, who would both win Nobel Prizes and profoundly impact Sowell’s own scholarship.

Becker did pioneering research on the economics of racial bias, and Sowell told me that “anything that dealt with discrimination on my part was within the framework of what Becker had said.”

Sowell’s book “Knowledge and Decisions,” which he and other economists count among his best professional work, was inspired by a 1945 academic paper by Hayek on how societies function.

Still, there is a case to be made that no one had a greater impact on Sowell’s career path than Stigler and Friedman. They were his instructors and his mentors. They served on his dissertation committee and even helped him with material needs.

When a problem arose with Sowell’s student aid and he contemplated leaving graduate school to find a job, it was Stigler who, without Sowell’s knowledge, secured a generous grant for promising academics from the Earhart Foundation.

Sowell later said that the grant “enabled me to complete the studies that led to my receiving a Ph.D. at the University of Chicago and to having a career as an economist.”

And it was Friedman who, years later, brought Sowell to the attention of Stanford University’s Hoover Institution, where he became a senior fellow in 1980 after he left teaching.

Sowell was still a Marxist at the time, but Friedman and Stigler saw something in him early on that led them to nurture his development as a scholar.

Richard Ware, the longtime head of the Earhart Foundation, recalled receiving the grant request for Sowell. The foundation held Stigler and Friedman in such high regard that the Sowell recommendation was basically rubber-stamped.

“When he got nominated, the letter was very short. I don’t know whether Stigler signed it or Friedman or both of them,” said Ware. “They nominated him for the fellowship, and they said he’s a socialist, but he’s too smart to remain one too long.”

According to Sowell, he didn’t abandon socialism because he was bamboozled by his Chicago professors. Rather, what ultimately began his drift to the political right was a summer job at the U.S. Department of Labor in the summer of 1960.

While studying the effects of minimum wage laws on employment, he began to “rethink the larger question of the role of government in general,” he recalled. “The more other government programs I looked into, over the years, the harder I found it to believe that they were a net benefit to society.”

Sowell came to his free-market beliefs by way of reflection and observation. But then, so did Friedman and Stigler, who both spoke of having liberal political inclinations in their own student days.

Sowell’s readers often express surprise when they discover that he started out as a Marxist, but Sowell said he suspected that at least half of his colleagues at the conservative Hoover Institution were also on the left in their 20s.

That’s certainly true of any number of notable black dissident thinkers, from Supreme Court Justice Clarence Thomas and race scholar Shelby Steele to economists Walter Williams and Glenn Loury. Like Sowell, all of them have faced regular attacks from black liberals and other critics often far more interested in questioning their motives than in addressing their arguments.