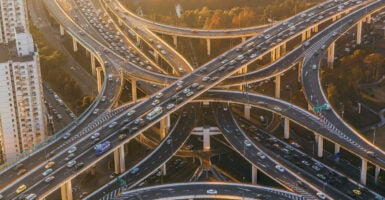 The White House held a press conference on June 24 to announce a bipartisan infrastructure deal. It was going to be an easy win for the left, with more money, power, and control for Washington.

In separate statements, the three leading Democrats demanded that any bipartisan infrastructure bill be accompanied by a partisan spending package passed with the maneuver known as reconciliation.

The contents being discussed for reconciliation are a socialist wish list: upward of $6 trillion in spending on the biggest expansion of the welfare state in generations, radical Green New Deal programs, massive amnesty for illegal immigrants, federal micromanagement of the economy, and more.

To make matters worse, it would be coupled with massive tax hikes that would kneecap the economic recovery.

Biden initially said that he wouldn’t sign an infrastructure bill until the reconciliation bill was on his desk. Afterward, the administration recognized that Biden’s statement had endangered the bipartisan plan and sought to undo the damage.

Yet what Biden said last week was not a slip of the tongue, but rather a continuation of what prominent congressional Democrats have been consistently saying.

It’s important to understand how we got here and why this new demand undermines the basics of political negotiation.

In March, the Biden administration unveiled an “infrastructure” plan that was more interested in building big government than improving highways. Congressional Republicans dismissed the plan, and Democrats threatened to pass it using reconciliation.

Legislators from both parties wanted to avoid a partisan infrastructure bill. After a series of meetings between Biden and Republicans failed to produce results, a bipartisan group of senators began a series of closed-door huddles to work on an infrastructure deal of its own.

Details of the bipartisan plan were not encouraging for conservatives. It contains a total of $1.2 trillion in spending, of which $559 billion would be above the status quo.

The transportation spending tilts left, with more money for little-used Amtrak and transit than highways. There are also billions in carve-outs for electric vehicles, “resiliency,” and environmental cleanups, plus huge amounts for infrastructure that the private sector is responsible for, like broadband and the power grid.

Just as bad, the bipartisan boondoggle relies on a series of dubious and inappropriate “pay-fors” to cover the costs. These include:

The end result is that this plan would add hundreds of billions in debt and interest payments, increasing the unfair burden being placed on America’s children.

Yet even though the bipartisan deal spends huge amounts on left-wing priorities and uses gimmicks to avoid politically damaging tax hikes, that apparently isn’t enough for the left, which now demands the monstrous reconciliation package as well.

At the outset of the infrastructure debate, Democrats used the threat of passing a hard-left reconciliation package to pressure Republicans into backing a left-leaning bipartisan deal.

If the negotiations were happening in good faith, Republicans who agree to the deal would lift the Democrats’ threat of an enormous reconciliation bill. After all, if Democrats could just turn around and get everything they want through reconciliation, what’s the point of negotiations?

That’s exactly why Republicans, from the centrists who negotiated the bipartisan plan to Senate Minority Leader Mitch McConnell, R-Ky., are so upset with the impossible demand. Even some moderate Democrats are balking at the radical move.

Legislators should recognize that while there is tremendous potential in getting federal infrastructure policy right, they don’t have to rush. There is enough time to craft a bill that maximizes the value of taxpayer dollars by spending on national priorities and cutting federal red tape.

Regardless of where infrastructure discussions go from here, it’s vital for Republicans to secure promises from leading Democrats that bipartisan compromises are not contingent on a radical left-wing spending package.

Such an extreme, bad-faith approach threatens to make Congress more dysfunctional than ever, which would be bad news for America’s future.