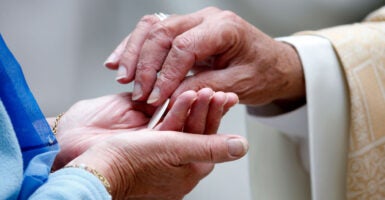 The U.S. Conference of Catholic Bishops voted 168-55 on Friday to proceed with a draft document “on the meaning of the Eucharist in the life of the Church” that, when finalized, may deny the Eucharist to politicians who support abortion. (Photo: Pascal Deloche/Getty Images)

In the latest dust-up, the U.S. Conference of Catholic Bishops voted 168-55 on Friday to proceed with a draft document “on the meaning of the Eucharist in the life of the Church” that, when finalized, may deny the Eucharist to politicians who support abortion.

Rep. Jared Huffman, D-Calif., tweeted in response, “If they’re going to politically weaponize religion by ‘rebuking’ Democrats who support women’s reproductive choice, then a ‘rebuke’ of their tax-exempt status may be in order.”

You read that right: A sitting congressman casually suggested repealing the tax-exempt status of one of the largest religious organizations in America because it is upholding biblical truth.

Among the least religious congressmen, Huffman describes himself as a humanist and said in a 2017 interview, “I suppose you could say I don’t believe in God,” but pro-abortion Catholic politicians have more to lose. In a letter, nearly 60 House Democrats complained about the bishop’s Eucharist vote.

Last year, a priest denied the Eucharist to then-presidential candidate Joe Biden because he supports abortion; the bishops’ document could make that official Catholic policy.

If push comes to shove, it seems these Democratic politicians care more about defending abortion than about being Catholic, since they are willing to openly defy their church’s moral authority to protect their political agenda.

Rep. Ted Lieu, D-Calif., tweeted a list of policies he supports despite Catholic teachings, brazenly concluding: “I dare you to deny me Communion.”

If these politicians disagree with the Catholic Church on so much, why do they bother remaining tied to it? If you disagree with a religion’s central teachings, then you can go find a more agreeable church or just drop it; that’s the essence of religious freedom.

The truth is, religious identities aren’t meaningless titles. They have real beliefs and demand real compliance from their followers.

The Catholic Church and most Protestant denominations have long taught that abortion is sin. The Catholic Church’s canon law holds that those “obstinately persevering in manifest grave sin are not to be admitted to Holy Communion.”

Protestants, too, recognize Jesus instructed his disciples in Matthew 18 that those who refuse to listen to the church and repent are to be expelled from the communion of believers. I only wish Protestants displayed as much courage as Catholics in confronting the greatest moral evil of our time.

Democrats pretending outrage at the Catholic bishops’ abortion stance know, but don’t care, that it teaches abortion is sin. They want to excise issues of morality like abortion from the church’s realm and insert them into the political realm.

In fact, they have made politics their new religion, complete with new morality and ethics (determined by polls), a new gospel (power), new mechanisms for evangelism (the mainstream media), and excommunication (cancel culture).

They wish people motivated and driven by their religious convictions would stay out of politics, or at least leave their religion at the door. They want the church to be subservient to the state, existing merely at the state’s pleasure, as a convenient mechanism for accomplishing state-directed purposes. They will permit a “form of godliness” as long as they can deny its power—much like China’s official socialist churches.

The First Amendment not only recognizes a right to the free exercise of religion, but also a right to free association—including the right not to associate. If Congress attempts to punish a religious organization for disassociating itself from politicians whose behavior denies the church’s core beliefs, that would clearly violate both of these constitutional rights.