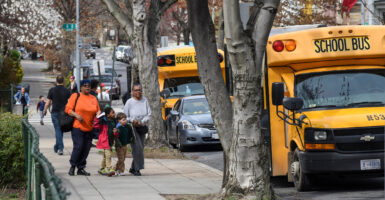 Schoolchildren are released from Ludlow-Taylor Elementary School in Washington, D.C., on March 13, 2020, after D.C. Mayor Muriel Bowser announced that the city's public schools would be closed due to the coronavirus pandemic. Now that D.C. students will be returning to class this fall, they could be exposed to another threat; namely, critical race theory. (Photo: Jahi Chikwendiu/The Washington Post/Getty Images)

In the nation’s capital, critical race theorists are rewriting public school lesson plans to make them what they call “culturally responsive.”

But that benign-sounding project is dangerously manipulative: Self-appointed social justice warriors are using the whims of extremist opinions to change the importance of subjects, such as science and math, along with history and literature, from the pursuit of truth to reinventing discrimination.

For example, science is said to have advanced “certain groups of people for profit and power” and must be changed to “solve social justice issues,” according to resources D.C. officials recommended for District of Columbia public school teachers.

The same goes for technology, engineering, art, and math. Education should “promote socioeconomic mobility” like the aforementioned linked article says, but such opportunities will not come from tracking the race of each textbook author, as it recommends.

Now, federal officials are taking a cue from state lawmakers to protect children from prejudicial ideas such as these, and appropriately so.

Rep. Glenn Grothman, R-Wis., has introduced a measure pertaining to a school district under federal oversight, D.C. Public Schools, to guard students from critical race theory’s inverted reality, where racial discrimination—the bane of prior generations of Americans—is being revived in school curriculums to “be a powerful tool to inspire activists.”

Some have condemned state lawmakers’ attempts to reject critical race theory in schools, saying the measures amount to censorship and evade important events in American history. Grothman’s proposal answers those criticisms with provisions that are distinct and legally robust.

For example, Grothman’s proposal says no District of Columbia Public Schools official “shall compel a teacher or student to adopt, affirm, adhere to, or profess” ideas that discriminate between individuals based on a person’s race. The proposal is not prohibiting speech, only behavior.

No one should be forced to affirm stereotypes, such as that people are “inherently” oppressive because of an immutable characteristic, such as race. Likewise, school assignments should not ask students to defend stereotypes or believe that someone’s “moral character” is determined by their race or ethnicity.

By rejecting compelled speech, the proposal is consistent with other vital statements that conservatives have praised in recent years concerning the dissemination of ideas, such as the University of Chicago’s statement on free speech.

As of 2021, nearly 100 universities across the country have adopted that statement, which says that schools should promote the discussion of a wide variety of issues and favor vigorous debates.

Schools, K-12 schools included, should be places that, as the Chicago statement says, allow “free and open inquiry in all matters,” and school officials should not “shield individuals from ideas and opinions they find unwelcome.”

K-12 school officials should also be so advised.

Critical race theory’s accusations of privileges afforded to people based on skin color and teacher professional development sessions that tell teachers they are biased even if they don’t realize it are examples of the unlawful discriminatory applications of the philosophy.

It’s true that the jurisprudence from cases concerning speech in K-12 schools is different from the legal opinions involving free speech on college campuses. But in order to help students to distinguish between right and wrong—between equality under the law and discrimination—educators must be able to explain why and how critical race theory’s ideas promote racial bias.

Teaching students how to identify discrimination is different than asking teachers to apply critical race theory by separating students into affinity groups according to race or projecting guilt on children according to skin color.

In states such as Idaho, Texas, and Oklahoma, legislators have adopted proposals meant to protect children from those ideas. State lawmakers there have rightfully been concerned for children’s well-being.

Such proposals must be carefully designed so that teachers and students are kept safe from critical race theory’s racist applications while allowing educators to warn children of the philosophy’s discriminatory principles.

Parents, teachers, and school leaders—in that order—are responsible for teaching children what racism is and why such behavior is not only wrong, but utterly incompatible with America’s promise of freedom and opportunity for everyone.

With discerning proposals that block compelled speech and align with the Civil Rights Act’s condemnation of racism, state and federal lawmakers can help Americans out of another bleak period marked by a new form of racial bias.

Apparently, we are all due for a reminder of the differences between dangerous manipulation and rejecting discrimination.