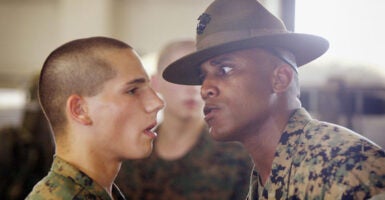 Critical race theory is as great an insult to our men and women in uniform as their shared service and identity is the best example of what it means to be an American. Pictured: Marine recruit Derrick Powers, 19, of Revere, Massachusetts, gets some personal attention from his drill instructor, Gunnery Sgt. Gregory Mitchell of East Point, Georgia, on June 21, 2004, at the Marine Corps Recruit Depot n Parris Island, South Carolina. (Photo: Scott Olson/Getty Images)

As a young Marine Corps first lieutenant assigned to an infantry battalion in the late 1980s, I had charge of the unit transport section of operators, mechanics, and supervisors tasked with taking care of our fleet of combat vehicles.

This group of Marines, like all with whom I served over a 20-year military career, was a wonderful cross section of America representing all walks of life.

My maintenance and operations chiefs were American Samoan and an African American, respectively. Our collection of more junior Marines included blacks, whites, and Latinos, young men from Texas, New Jersey, California, and West Virginia, among others.

They came from the city and the country, from poor and middle-class families. Some were Catholic, others Protestant, and some had no strong affiliation with any organized religion.

In the maintenance bay, on the equipment lot, or in the field, we would hear a musical mix of country, rock ’n’ roll, heavy metal, and rap.

Everyone pitched in to accomplish the mission during unit fitness runs, shop clean-up, preparing for inspections, embarking equipment for deployments to Japan and South Korea, and supporting battalion operations during training and exercise events.

Everything just worked and worked well. Why?

They humped the same combat loads, ate the same field rations, fired the same qualifications at the rifle range, suffered the same annual refresher training for proper use of gas masks. They worked the same long hours in hot and sweaty, cold and damp, sunbaked or frigid or windblown field conditions, tolerated the same irritating micromanagement, and enjoyed the same positive leadership interventions from higher headquarters.

They were a team, committed to each other and expecting the same high levels of performance irrespective of skin color, ethnicity, economic or social background, accent, or taste in music. Each shared in the accomplishments of his fellow Marines, and each was quick to take to task any teammate who fell short of standard.

I can’t help but wonder what it would have been like if each person in that section had been pitted against each other, assessing his fellow Marine’s trustworthiness or reliability or capability based on the color of his skin.

What if the Latino Marines viewed everyone with suspicion, presuming that they were to be treated as an inherently separate group that spoke a different language among themselves and therefore were not to be trusted? And what was with the Samoan and his completely different childhood, body type, food preferences, and speech peculiarities?

How could this group of Marines have operated as a team, especially when stressed in a combat situation?

But this is what class-warfare ideologies such as critical race theory and identity politics seek to impose on our military: perspectives and identities and manufactured victimization that are inherently divisive, inherently anti-team, and inherently anti-American.

Each of those young Marines had the same opportunity to excel, to reenlist, to be promoted based on merit, to take advantage of education programs, and to prove he had what it takes to be a Marine—again, regardless of where he came from or what he looked like.

That unit was the finest representation of the American idea just as every crew of a Navy ship; every company, battalion, and brigade of the Army; every squadron within the Air Force; and delta within the Space Force.

America’s military draws young men and women from all backgrounds and all walks of life, integrating them into teams united in common identity and shared purpose, to serve our country. What are they to think when they are told that the country they have sworn to serve is structurally prejudiced to favor one group over another?

How is anyone to have credibility if he or she is viewed as having gained a position not from hard work, competence, and meeting or exceeding standards but because of race or gender?

How is the chain of command in any military organization to retain its legitimacy and authority if those more senior in command second-guess how their directives might be viewed through the personal lenses of those in their charge, or those who are junior question the legitimacy of the hierarchy above them?

Yet these very problems are now emerging as a result of such training being imposed on our troops, evidenced by hundreds of personal complaints registered by personnel on a whistleblower website established by Sen. Tom Cotton, R-Ark., and Rep. Dan Crenshaw, R-Texas, both military combat veterans.

Success in combat depends on the cohesion and competence of the forces involved. These, in turn, derive from teamwork and standards, which are built on trust, mutual respect, merit, shared experience, and a belief in service to a higher purpose. Critical race theory and other such divisive concepts would destroy all this.

The U.S. military is the epitome of opportunity, shared purpose, and constructive idealism—the very things America was built on and that have driven it to become the best example of what is possible. This is why so many people from around the world have flocked to our shores since our founding, to participate in our ongoing great experiment.

Critical race theory is as great an insult to our men and women in uniform as their shared service and identity is the best example of what it means to be an American. The leaders of our military, both uniformed and civilian, must not lose sight of this.

All Americans should demand that the Biden administration put an end to indoctrination of our military with critical race theory.