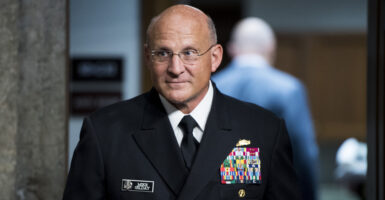 Adm. Michael M. Gilday, the chief of naval operations, did not answer questions Tuesday about whether author-activist Ibram X. Kendi’s opposition to interracial adoption and capitalism is extreme.

But, Gilday did tell the House Armed Services Committee that Kendi’s controversial book “How to Be an Antiracist” would lead to “a better Navy” by promoting more discussion on racism in America.

Kendi is director of the Center for Antiracist Research at Boston University, and his book contends that America is a fundamentally racist country.

At the hearing, Rep. Jim Banks, R-Ind., teed up a question to Gilday by noting that “the Navy recently completed a one-day ‘stand-down’ to remove extremism from the ranks.”

“In my view, Kendi has espoused extremist beliefs that clearly violate the oath to the Constitution I took when I served in the Navy,” Banks said.

“Yes or no: Do you personally consider opposition to interracial adoption an ‘extremist’ belief?” Banks asked Gilday.

The admiral’s microphone was off, so his response was inaudible.

“Yes or no: Do you personally consider advocating for the destruction of American capitalism to be ‘extremist?’”

This time, Gilday could be heard.

“Here’s what I know, Congressman: Racism is in the United States Navy,” Gilday said.

“Admiral, you recommended every sailor in the United States Navy read this book. It’s a yes or no question,” Banks said, pressing the admiral on the capitalism question.

“I’m not forcing anyone to read the book. It is on a recommended reading list,” Gilday replied.

Several times, Banks sought a yes or no answer, but Gilday never responded quite that clearly.

Banks asked: “Did you read the book?”

Gilday responded:  “I did.”

Banks followed that in college, Kendi had said “white people are ‘a different breed of humans’ and are responsible for the AIDS virus.”

“Yes or no: Do you personally consider the conspiracy that white people started AIDS to be an extremist belief?” Banks asked.

Again, Gilday did not directly respond.

“I would have to understand the context of statements made. I’m not going to cherry-pick quotes from somebody’s book,” the admiral said, adding:

This is a bigger issue than Kendi’s book. What this is really about is trying to paint the United States military—in this case the United States Navy—as weak, as woke. We’ve had sailors that have spent 341 days at sea last year with minimal port visits, the longest deployments we’ve had.

Banks later followed up by saying, “So if sailors accept Kendi’s argument that America and the Navy are fundamentally racist, as you’ve encouraged them to do, do you expect that to increase or decrease morale and cohesion? Recruiting rates?”

Gilday didn’t respond by saying he would expect an increase or a decrease.

“I do know this, our strength is in our diversity,” the admiral said, adding:

Our sailors understand that. Racism in the United States is a very complex issue. What we benefit from is an open discussion about those issues, that we don’t try to ignore or rewrite it, but we actually have a discussion about it.

There will be various views, and I trust sailors will come to an understanding of hopefully separating fact from fiction, agreeing or disagreeing with Kendi in this case, and come to hopefully very useful conclusions about how we ought to treat each other in the United States Navy.

Banks: “Admiral, why did you put this book on the reading list and recommend that every single United States sailor read it?”

Gilday: “Because I think it’s really important to consider a variety of views.”

But Banks pushed for a longer answer to his question.

Gilday replied: “I think we’ll be a better Navy from having open, honest conversations about racism.”

“The reading list is lopsided with anti-racism and a bent toward critical race theory,” Sadler told The Daily Signal. “A reading list is an endorsement. … It is a sanctioned reading list, whether one agrees or disagrees with the list.”

Uniformed officers, Sadler added, are limited in their capacity to question senior and political leadership on any matter.