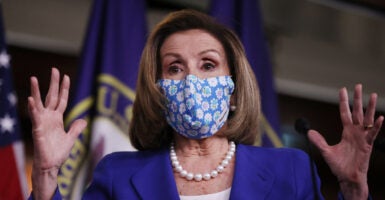 As such, it’s incongruous that 113 sponsors of so-called “Medicare for All” voted to increase government payments to profitable health insurers through the end of next year.

Those same members of Congress appear ready to embrace a Biden administration proposal to make those increased payments permanent.

If Congress follows through on the request, it will constitute a $200 billion gift from the federal Treasury to profitable health insurance companies that participate in the Obamacare exchanges.

Those insurers already are profiting handsomely from $50 billion in annual federal payments to subsidize Obamacare policies for low- and middle-income people.

In March, Congress approved a request to expand those payments through the end of next year.

According to the Congressional Budget Office, that $34 billion increase in government payments to insurers will do little to reduce the number of people who lack coverage.

Instead, the new spending will primarily benefit people who already have insurance, including the wealthiest households. The bill for the first time would make people eligible for government premium assistance regardless of their income.

President Joe Biden has proposed to make those provisions permanent. The same members of Congress who backed the temporary increase are expected to vote later this year on making them permanent.

Approving that proposal would be a windfall for insurance companies. The permanent expansion would result in insurers collecting $834 billion in taxpayer dollars over 10 years, nearly $200 billion more than they would have received without the increase.

While the government pays those subsidies on behalf of people who enroll in exchange-based coverage, the money flows directly from the Treasury to insurance companies.

Those federal payments are by far the largest source of revenue for insurers that sell through the exchanges, a business that has grown more lucrative as premiums have skyrocketed. That’s in part because subsidies rise dollar for dollar with benchmark premi­ums. The higher the premiums, the more government money insurers pocket and the greater their gross margins.

While insurers struggled in their exchange-based businesses in Obamacare’s early years, they swung to profit as they increased their premiums, knowing that the federal government would largely bear the additional costs for recipients of premium subsidies.

Nationally, the average premium paid for individual coverage rose by 129%—that is, more than doubled—between 2013 and 2019.

As premiums rose, margins rose with them. The average monthly per-enrollee gross margin for insurers in the individual market was $143 in 2020. That was nearly 80% higher than the gross margin insurers realized on their group business, where networks tend to be broader and cost-sharing is less burdensome, and where government premium subsidies are not available.

Unlike in their group business, the lion’s share of insurance company reve­nue in the exchange-based individual market comes from the government, not from policyholders.

According to data supplied by the Centers for Medicare and Medicaid Services, insurers selling in the Obamacare exchanges collected an average of about $6.1 billion in monthly premiums through the first half of 2020.

Of that $6.1 billion, nearly $4.5 billion came directly from the U.S. Treasury. Insurers selling through the exchanges thus derived 73.8% of their revenue—and a large share of their profits—from taxpayers.

And that was before Congress directed the Treasury to write bigger checks to insurance companies.

It’s no surprise that insurance industry lobbyists want more taxpayer money. What’s surprising is that congressional liberals are obliging them.

Many of them support a single-payer system, where government finances medical goods and services, consigning private health insurers to extinction. Increasing Obamacare premium subsidies would have the opposite effect, using federal money to make the insurance industry more profitable.

There’s also a chance that the Supreme Court will further complicate the issue. The justices are expected to rule in the next week or two on the constitutionality of Obamacare’s individual mandate. If they strike down the mandate, the justices will also have to decide whether to strike down the rest of Obamacare with it.

If that were to happen, that would totally upend the president’s plans to expand the law. If it doesn’t happen, liberals in Congress once again will have to decide whether to enrich an industry they previously vowed to destroy.