‘Medicare for All’ Actually Isn’t Medicare at All 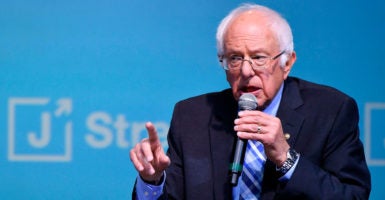 Far from being a gradual transition, Sen. Bernie Sanders' "Medicare for All" inevitably would cause the immediate disruption of health care for our seniors. Pictured: Sanders speaks Monday at the J Street National Conference in Washington. (Photo: Mandel Ngan/AFP/Getty Images)

Sen. Bernie Sanders, I-Vt., was recently on comedian Jimmy Kimmel’s late night show to discuss, among other items on his agenda, his vision for health care in America.

In one interesting statement, Sanders described the rollout of his plan: “I want to expand Medicare to include dental care, hearing aids, and eyeglasses, and then what I want to do is lower the eligibility age the first year from 65 down to 55, then to 45, then to 35, then we cover everybody.”

There is a sleight of hand here.

What Sanders seems to be describing is the gradual expansion of the existing Medicare program, which currently covers Americans 65 and over, to include everyone eventually. In reality, Sanders’ signature bill, “Medicare for All,” is anything but Medicare.

Medicare comes in several forms, including Parts A and B, which pay for inpatient and outpatient visits along a fee schedule with premiums and deductibles, and Part C, also known as Medicare Advantage.

This is the system that covers 60 million Americans and enjoys high satisfaction ratings.

Medicare for All would scrap all of this.

One of the most misleading aspects of Medicare for All is that it is not Medicare at all.

Medicare offers several choices between traditional Medicare and Medicare Advantage, which itself offers a whole marketplace of health plans. In addition, supplemental insurance is available that helps pay for additional costs and services, so beneficiaries are able to tailor coverage to fit their needs.

Medicare for All, however, would replace all of this with a system that is free at the point of care but paid for by taxes. Essentially, this is not Medicare but Medicaid for all.

If every provision of Medicare for All rolled out smoothly, millions of American seniors necessarily would have their current health care stripped from them and replaced with whatever the Department of Health and Human Services decides is health care.

Far from being a gradual transition, Medicare for All inevitably would cause the immediate disruption of health care for our seniors. Then, over the course of two years, hundreds of millions more Americans would be covered under the same system that previously was reserved for seniors.

Furthermore, once everyone is on the Medicare-cum-Medicaid for All program, will our health necessarily improve?

Health outcomes aside, receiving care for free at the point of service sounds very good to those who can receive it, but it may not be there if we find no way to pay for it.

Medicare for All would cost over $30 trillion in the next 10 years in ideal conditions, but still require physicians and providers to take a pay cut of up to 40% and continue working with the same productivity.

The problem is that physicians already are heavily burdened with their workload. In the 2018 Physicians Foundation survey, up to 80% of physicians reported working at their maximum capacity or beyond.

Of these physicians who do not see Medicaid patients, or limit the number they see, over a third are in primary care, exactly the kind of physicians we need in greater numbers.

It is not that doctors or greedy, but a combination of administrative burdens, delays in processing claims, and low reimbursement rates made it difficult to justify seeing many Medicaid patients.

As Medicaid and Medicare both drastically underpay relative to private health insurance, hospitals and providers have to charge private insurance more to make up the difference.

If private insurers disappear, as they would under Medicare for All, the whole system would crumble. Health care for free at point of service is great, if anyone is there to give it.

Medicaid exists as a social safety net for low-income households. It is intended to fully cover medical costs for the Americans least able to pay for it.

Providers who participate in Medicaid must accept the government-mandated prices for services and deal with oftentimes long delays in receiving reimbursement that is below the cost of practice.

Structurally, Sanders’ Medicare for All bill bears little resemblance to Medicare, but instead is very similar to Medicaid. Likewise, it would very likely carry with it all of the flaws of Medicaid.

It is a common trope of the left to say that we can’t afford health care in America any longer. But in truth, we can afford placing all of America on Medicaid even less.