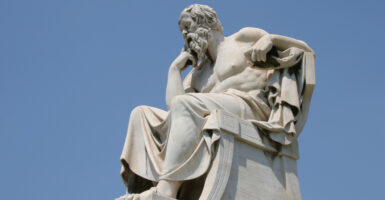 Princeton has set a lower bar for entry and exit based on the idea that the change will undo “systemic racism” and promote inclusivity and “equity.” Pictured: A statue of Greek philosopher Socrates stands at the Athens Academy in Athens, Greece. (Photo: Prisma/UIG/Getty Images)

Ideology and virtue signaling apparently are replacing both education and standards at America’s top schools.

Princeton has set a lower bar for entry and exit based on the idea that this will undo “systemic racism” and promote inclusivity and “equity.”

Could there be a better way of teaching students the classics outside the traditional methods?

In a vacuum, one could perhaps see benefit in removing some entry requirements to bring in a wider swath of students.

But in greater context, this seems unlikely. Creating an enlightened, self-governed citizenry no longer is really the goal, as Princeton’s announcement made clear.

How things have changed in the last century.

An 1892 essay defending Greek, Latin, and other modern language requirements at Harvard, written for The Atlantic magazine, is an illuminating look into what Americans of that era saw as the crucial foundation of an elite, liberal education.

These requirements were not just for classics students, but all students passing through Harvard.

The author explained how much is lost in studying Greek and Roman classics without a deep understanding of the languages they originally were written in.

Harvard’s requirements were not there to impose “unnecessary and profitless work,” in the words of the author. Instead, the requirements were there to get students to think with a stable foundation of knowledge. It was to cultivate the aptitude and thought of citizens who likely would be the country’s next generation of leaders. A “natural aristocracy,” as Thomas Jefferson called it, based on something akin to merit.

Even this emphasis on “critical thinking” over knowledge of language and the classics may have signaled a decline in education, but there’s no doubt that standards have eroded further in the 20th and 21st centuries.

John McWhorter, a linguistics professor at Columbia University who has been one of the most relentless critics of the new wokeness, explained how Ivy League schools’ dropping of requirements actually reinforces racism.

In a new piece for The Atlantic, McWhorter writes that Princeton’s decision is a “typical example of a university rushing to make policy changes under the guise of promoting racial equity that are as likely to promote racism as to uproot it.”

Looking at classical texts as part of the “scaffold of white supremacy,” as many academics now see it, and making that the primary or only lens with which to view them “qualifies less as reflection than as declaration,” McWhorter writes.

It is a “one-note clarion call that discourages anything but assent,” he adds. “It leads to no further questions. It is, beyond a certain point that we arrive at quickly, unscholarly.”

When students get a degree in classics, they should know Latin or Greek. Even if they are black. Note how offensive that even is. But the Princeton classics department’s decision forces me to phrase it that way. How is it anti-racist to exempt black students from challenges?

Notice how modern academic shifts are moving away from both memorization and cultivating independent thought, as McWhorter notes. Instead, these changes are increasingly aimed at reinforcing the dogma and ideology of left-wing identity politics or in concealing low standards with condescending justifications.

What we are left with is a “meritocracy” without merit, little more than a class-based system where an “elite” maintains its status by its familiarity with arcane but shallow terminology that cloaks an overall decline in legitimate claims to that status.

It seems most likely that the decision to drop Latin and Greek from Princeton’s requirements is being done to signal both that Western civilization is inherently unworthy of study and—perhaps just as perniciously—that we expect much lower standards for even the highest performing modern-day students, particularly racial minorities.

Forget learning Latin and Greek or any of those other structures of “white supremacy.”

Success at an Ivy League school and among the new American elite is now more reliant on understanding a new language, the language of a fanatical woke cult that can quickly cancel you for the smallest transgressions and knock you off the ladder of success on a whim.

To operate in the highest levels of the corporate, governmental, and nonprofit world, a thorough liberal education is increasingly unnecessary.

To navigate this new world, it’s far more important to know what declaring your pronouns after you say your name is all about, and what the “+” stands for in LGBTQ+.

This is what America’s most prestigious college prep schools already are doing. They are laying the groundwork to protect the future status of our new overcredentialed, simpleton overlords.

Public schools are following suit while methodically tearing away the practical education that students need to thrive in life or any career that isn’t just political activism. The trend particularly harms students who aren’t on the track to go to a top-tier university.

The soft bigotry of low expectations simply is being cloaked in the dogmas of anti-racism and Diversity, Equity, and Inclusion—the Liberté, Egalité, Fraternité of today’s woke revolutionaries.

Earlier this year, the University of California dropped the SAT from consideration in college admissions, based on the idea that the tests were biased against minority and low-income students.

The SAT very well may be a flawed way of fully evaluating students, but as my Heritage Foundation colleagues Lindsey Burke and Mike Gonzalez write, it’s likely that ditching the standardized test is being done to allow schools to place greater emphasis on factors such as race and national origin in admissions.

Even the “hard sciences” aren’t immune to these changes.

For instance, Seattle Public Schools announced in 2019 that it would be adding ethnic studies to the K-12 math curriculum, changing requirements to include vapid social justice sloganeering rather than focusing on math proficiency.

The Oregon Department of Education this year encouraged teachers to take training in “ethnomathematics” to help “dismantle racism” in math.

What’s an example of math racism, according to the training? Telling students to “show their work.”

Public schools in Loudoun County, Virginia—which have been at the forefront of battles over critical race theory and wokeness in classrooms—have considered dropping accelerated math programs to promote “equity.”

Where we once aimed for the ideal of equality of opportunity, we now worship the false premises of perfect equity.

Where we once sought truth to create a better America for ourselves and posterity, we now recognize only the “lived experience” of those who identify highly on the hierarchy of oppression and openly embrace neo-segregation.

These changes are creating an unthinking, more hateful America paralyzed domestically and held in contempt internationally.

It is a crisis that infects all levels of American society. Americans who want to see a great future for this country should rebel against it.