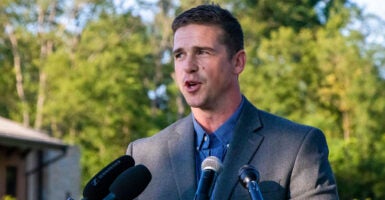 Parents in an affluent Virginia county continue to rally around an elementary school gym teacher who was suspended for saying he wouldn’t call children who identify as transgender by their new preferred names and pronouns.

Byron “Tanner” Cross, whom a judge ordered reinstated Tuesday, had spoken against proposed changes in policy during a portion of a Loudoun County School Board meeting reserved for public comment.

“The school board asked for public input and being a concerned citizen and a teacher, [Cross] came forward off school time and gave his opinion as to what he thought was damaging to children and how best he could help them,” parent Beverly McCauley told The Daily Signal in an interview Wednesday.

The Loudoun County public school system suspended Cross two days after he said at the May 25 board meeting that he would not “affirm that a biological boy can be a girl, and vice versa,” citing his Christian faith.

Plowman, granting the temporary injunction sought by his lawyers with Alliance Defending Freedom, ordered the school system to reinstate Cross and lift its ban on his entering any school buildings or grounds. He gave lawyers on both sides until June 16 to say whether they want a trial.

At a school board meeting Tuesday night, parents spoke out against the gym teacher’s suspension over the transgender pronouns issue as well as the teaching of critical race theory, before the board officially welcomed a new school superintendent, Scott Ziegler.

McCauley, 53, says she has lived in Loudoun County for 40 years. She has three biological children, but also has been a foster mother to 32 other children over the years. Five are in Loudoun schools now, she says.

Virginia’s Loudoun County, about 45 miles west of the nation’s capital, is one of the richest counties in America. But Leesburg Elementary School, where Cross teaches physical education, serves many children from low-income families, McCauley told The Daily Signal.

“Tanner [Cross] is in the poorest school in all of Leesburg. Leesburg Elementary has the highest population of single mothers and single parents of any other school in the entire district,” McCauley said.

“I’ve been there before and I’ve seen children call him ‘Dad’ when they leave,” she said. “He is an admired and respected teacher, and I think it was disgusting what they did to him.”

McCauley said she thinks that Cross, 38, isn’t the only Loudoun County teacher to have faced such an issue, and perhaps suspension, because of the school system’s left-wing political agenda.

Ian Prior, who has a second grader and a kindergartener in Loudoun schools, agrees.

“When they suspended Tanner Cross, there was outrage, absolute outrage,” Prior told The Daily Signal on Wednesday. “But to me, I thought this was going to happen at some point.”

Prior, 43, is executive director of Fight for Schools, which calls itself a nonpartisan political action committee that supports “commonsense candidates” for school board.

“I believe this has happened before and it just hasn’t created the national outcry,” he said of Cross’ suspension. “But since this has happened, I’ve heard that other [school system employees] have also been put on administrative leave for similar First Amendment issues.”

Prior’s website, FightForSchools.com, cites a news report to allege that Loudoun County School Board members and teachers are among those in a Facebook group that is “targeting parents opposed to critical race theory.”

Critical race theory “makes race the prism through which its proponents analyze all aspects of American life,” Heritage Foundation scholars Jonathan Butcher and Mike Gonzalez wrote in a Dec. 7 report.

This perspective, they added, “underpins identity politics, which reimagines the U.S. as a nation riven by groups, each with specific claims on victimization.”

The Fight for Schools website cites a March 28 report by WTOP News Radio on a private Facebook group that targets Loudoun County parents who oppose the teaching of critical race theory.

The website adds: “The group, which is called ‘anti-racist parents of Loudoun County,’ consists of over 600 members, some of whom are accused of sharing personal information of parents who don’t support the controversial theory, WTOP News reported.”

The school system still has no comment on Cross’ status, Wayde B. Byard, spokesman for Loudoun County Public Schools, told The Daily Signal in an email responding to questions about whether the gym teacher had returned to school and parents’ praise for his character.

Teachers such as Cross, McCauley said, aren’t there to push an agenda or ideology on children.

Prior said he is grateful that Plowman, the Circuit Court judge, defended First Amendment rights in his decision ordering Cross’ reinstatement pending a possible trial of the teacher’s lawsuit against the school board.

“What you saw from the judge was a pretty strong rebuke against Loudoun County Public Schools for their abject disrespect of the First Amendment rights of Tanner Cross,” Prior told The Daily Signal, “and I think that disrespect is something that you see the public schools assigned to parents, teachers, and students as well.”