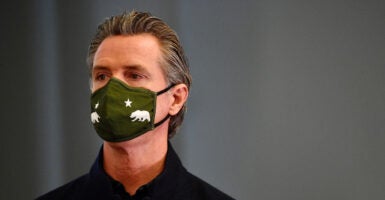 During America’s first-ever national lockdown, thousands of unelected bureaucrats, as well as federal and state governments, assumed enormous powers not usually accorded to them.

They picked and chose which businesses could stay open without much rationale. They sent the infected into nursing homes occupied by the weak and vulnerable.

Their rules for prosecuting those who violated social distancing, sheltering in place, mask-wearing, or violent protesting often hinged on political grounds. Their spending measures on “infrastructure” and “health care” were excuses to lard up redistributive entitlements.

Conservatives moaned that left-wing agendas were at work beneath the pretenses of saving us from the pandemic. And the giddy left bragged that it was true.

After the 2008 financial meltdown, Barack Obama spoke of “fundamentally transforming” the country. Now he’s back, weighing in on the panic-driven, multitrillion-dollar spending that has pushed America’s debt to nearly $30 trillion.

“There’s a teachable moment about maybe this whole deficit hawk thing of the federal government,” Obama said in a recent interview with Ezra Klein of The New York Times. “Just being nervous about our debt 30 years from now, while millions of people are suffering—maybe that’s not a smart way to think about our economics.”

He apparently means that borrowing tons of money in a pandemic and not worrying too much about paying it back is a new, better approach to economics.

“There is opportunity for reimagining a progressive era as it pertains to capitalism,” Newsom said. “So yes, absolutely, we see this as an opportunity to reshape the way we do business and how we govern.”

Hillary Clinton said something similar early in the pandemic: ” … This would be a terrible crisis to waste, as the old saying goes. We’ve learned a lot about what our absolute frailties are in our country when it comes to health justice and economic justice … .”

The “old saying” she cited was actually a recycled quote from Rahm Emanuel, who was Obama’s chief of staff. His exact quote was: “You never want a serious crisis to go to waste.”

Later, Emanuel clarified that crises allow radical changes that had never been considered or were considered impossible. Without catastrophe, no one in his right mind would vote for far-left agendas.

Manipulating COVID-19 is not just a left-wing effort. The Davos crowd responsible for the World Economic Forum has talked of using the global crisis to push “the Great Reset.” These self-appointed guardians wish to create global rules governing the world’s economy, energy, transportation, education, climate, wealth distribution, and media. In other words, a few elites will seek to override local laws.

What do all these efforts have in common?

One, they are all top-down agendas. Polls show that average Americans are worried about massive borrowing. They fear the government gaining new powers under the pretext of a pandemic.

Two, our elites are anti-democratic. They talk of forcing change down the throats of citizens through edicts, executive orders, court decisions, or bureaucratic directives. Obama, Newsom, Clinton, and the Great Resetters don’t want to put up their agendas for discussion before the people and their elected representatives.

Three, behind fancy slogans about not wasting crises, teachable moments, and resets is the panic-porn reality that these initiatives are not popular in normal times because they defy common sense.

If Americans tried Obama’s economics with their family budgets, they would go broke or go to jail after piling up unpaid debts. Only elites, with their private security guards and the money and influence to remain safe, talk of defunding the police. Few of the woke elites who fly their carbon-spewing jets into Davos ever fly economy class.

Four, our rich revolutionaries have no record of policy success. Massive borrowing, increasing government powers, restrictions on personal freedoms, higher taxes, and more regulations don’t appeal to most Americans. Brexit and pushbacks against the European Union suggest that the same is true abroad.

Many members of the left-wing elite became wealthy by monetizing their political careers through lucrative insider networking. A cynic might conclude they didn’t go full reset until they first got filthy rich—allowing them not to live like, think like, or listen to the rest of us.