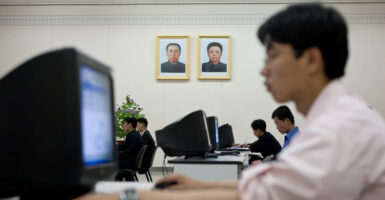 Since 2007, the North Korean regime in Pyongyang has engaged in an array of cyberespionage, cyberterrorism, and other cyberattacks. Pictured: Portraits of North Korea's "Dear Leaders" hang on the wall as a North Korean man uses a computer in the Grand People's Study House library on May 22, 2009, in Pyongyang. (Photo: Eric Lafforgue/Art in All of Us/Corbis/Getty Images) 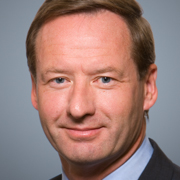 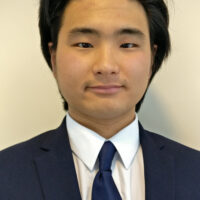 Luke Kim was an intern in The Heritage Foundation’s Asian Studies Center. He will be attending The Citadel military college this fall to study international politics and policy.

A U.S. grand jury indicted three North Korean hackers in February on charges of attempting to steal or extort $1.3 billion from international financial institutions and companies.

The egregious North Korean cyberattack was hardly an isolated event. Since 2007, the regime in Pyongyang has engaged in cyberespionage, disruptive and destructive attacks, cyberterrorism, and cyber bank robbery, as well as attacks on cryptocurrency exchanges and pharmaceutical companies working on COVID-19 vaccines.

In January 2018, North Korean hackers attempted to steal $110 million from Bancomext. In May 2018, they hacked Banco de Chile that forced the transfer of $10 million. The hackers also “withdrew” $13.5 million from Cosmos Bank in August 2018, which involved more than 14,000 ATMs in 28 countries over five hours.

From cyberattacks on banks and other financial institutions, Pyongyang has garnered at least $2 billion.

Since these attacks, the North Korean cyberattack has become a top national security concern.

According to the United Nations Panel of Experts, the North Korean hackers raise money for their government to finance its nuclear weapons program and to circumvent the international sanctions imposed on the Kim regime.

In response to North Korean cyberattacks, the U.S. government must enhance its firm approach against those hackers and increase cooperation with banks to prevent them from laundering stolen money. It must also engage with the private sector to improve cyberdefenses.

Washington needs to make addressing the threat a national priority by establishing a comprehensive whole-of-government strategy, which it coordinates with other governments, as well as with the private sector on a global basis to augment cyberdefenses.

The U.S. should also more fully enforce existing laws and assess what additional legislative and executive actions are needed, including greater regulations of cybercurrency exchanges.

Washington should determine a range of punitive steps—both cyber and military—for responding to attacks deemed detrimental to national security.