Why China, Russia, Iran, and North Korea Care About US Election Results 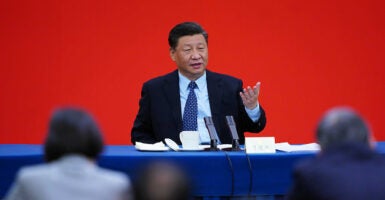 America's adversaries are attentively watching the U.S. election. Whoever wins the White House will dramatically affect their strategies for the next four years. Pictured: Chinese President Xi Jinping is in an advantageous position no matter who the next U.S. president is. (Photo: Xinhua/Xie Huanchi/Getty Images)

Americans aren’t the only ones waiting for the outcome of the U.S. presidential election. So are people around the world. And they are asking the same question many Americans are: What difference will it make for them?

No poll-watchers are more attentive than America’s adversaries are. So how will the world turn when the global bad guys find out who is president?

Let’s start with Vladimir Putin, who probably cares the least about who wins the presidency.

Russia’s president has a lousy hand to play. Moscow remains under sanctions from the West. Putin has trouble in his own backyard with protests in Belarus and persistent fighting between Armenia and Azerbaijan. He is still wet-nursing a crippled regime in Syria, a costly and fruitless enterprise.

He’s also facing opposition at home, while his economy limps along ravaged by COVID-19 and corruption. Putin’s pet energy project in Western Europe, Nord Stream 2, due to stiff international opposition, may never be completed. The reality is the U.S. administration has hammered Russian meddling the last four years.

Putin can continue to pretend he is the puppet master of malicious activity and manipulation. But the reality is that Moscow is more of a bugbear for American politics than an existential threat.

Mind you, Putin is still a threat, like a wounded, hungry bear that only a fool with a bag full of burgers would turn his back on. No matter who wins the U.S. election, folks will be watchful and wary of Russia after it’s over. Nobody has an appetite for another Russian reset.

North Korea is a big wild card. Who knows what Kim Jong Un will do?

Here is what we do know. The Democratic People’s Republic of Korea has been unusually quieter in the second half of President Donald Trump’s watch. Even though the regime continues to develop its nuclear and missile capabilities, it has stopped testing intercontinental ballistic missiles since 2017.

Is it waiting to see if Trump will still be around before it cuts a deal? Would it try to test a different president as it does every new American and South Korean president?

No one knows for sure.

The reality is, regardless of who wins, there is not really any place for a more constructive and prudent strategy with North Korea than maximum pressure matched with an offer to relent only in exchange for a process of complete, verifiable, and irreversible denuclearization. Everything else, from bribes to multilateral forums, has completely failed.

The notion of getting rid of North Korea’s nukes by force of arms or regime change is nuts. So let’s stay the course. After the elections, the future of a better fate for North Korea rests with Pyongyang, not Washington.

Iran likely has the highest expectations that a change in the Oval Office will be a godsend. Maybe.

There are many who want to just put the Iran deal back in place. But is that realistic? What about all the Iranian cheating?

Just going back to the Iran deal would be the biggest chump move. It would be an unprecedented setback to all the progress made over the last four years in the region.

Any administration that did that would have to spend a lot of effort and resources trying to recover.

The smart move would be to pick up from where we are, rather than starting over and jumping back into the quagmire of failure.

China presents different issues than the other adversaries that will confront whoever the president is next year. Unlike the others, Beijing has many cards to play.

It can get more aggressive. It can distract the world by claiming to be the global leader on climate change. It can bribe American businesses and elites as well as our allies. In short, it has options.

The U.S. president’s policies will, in part, be shaped by what curveballs Beijing throws at him and the country. This administration has demonstrated really well it won’t be bullied by China. That’s the smart play, the one that appears to have put Beijing most off its game in the last few years.

Look, for example, at the number of countries that followed the U.S. lead in booting out Huawei and its poison 5G pill. The best policy would be to keep doing what we are doing, and a different administration would do well to heed that advice.

The bottom line is this: If we want to keep America safe, free, and prosperous—and make the world safer in the face of these global bad boys—we should just keep doing what we are doing.