Biden Plans to Reduce the Deficit—in 2030 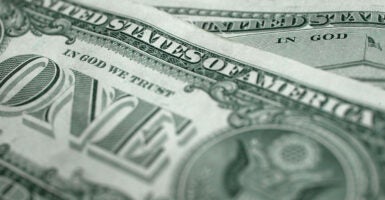 President Biden plans to increase the projected federal deficit every year he is in office and then leave it to a successor to do something about an ever-increasing federal debt. (Photo Iilustration: Alex Wong/Getty Images)

Americans, President Joe Biden’s budget proposal suggests, should not worry that he plans to significantly increase federal deficits over the next eight years.

Why? Because he intends to begin reducing them—but not eliminating them—nine years from now.

Of course, even if the now 78-year-old Biden were to run for reelection in 2024 and win the presidency again, he would be out of office in nine years.

Page 26 of Biden’s budget proposal carries a profoundly ironic subhead. It says: “Putting the Nation on a Fiscally Responsible Path.”

“The budget charts a fiscally responsible path for delivering a stronger, more prosperous economy,” it says.

“In response to the nation’s longer-term fiscal challenges, the budget’s proposals would reduce the deficit in later years,” it explains.

In “later years”? What does that mean?

“Over the long term, the United States does face fiscal challenges,” the Biden budget admits.

“There is also uncertainty about the interest rate outlook.”

But it would be a mistake to reduce federal deficits any time soon, Biden’s budget argues.

“A budget that added to the long-term deficits would worsen fiscal health, while a budget that reduced deficits today by underinvesting in the American people would result in slower, more stratified growth that would cause more damage than one that invests appropriately,” it says.

“The budget responsibly balances these needs and risks by charting an economically and fiscally sound course for the near term and the long term.”

In plain English: Biden plans to increase the projected federal deficit every year he is in office and then leave it to a successor to do something about an ever-increasing federal debt.

This plan is exposed by the actual numbers the administration published in its budget proposal.

Page 38 of Biden’s proposal contains a table under the headline: “Effect of Budget Proposals on Projected Deficits.” It shows the baseline of projected deficits from fiscal 2022 through fiscal 2031 and compares these to the resulting deficits in the 2022 budget.

Under Biden’s proposal, according to this table, the federal government will run a cumulative deficit of $14.531 trillion in the 10 fiscal years from 2022 to 2031.

In the first eight of these years (2022 through 2029), the annual deficits resulting from Biden’s proposal are projected to be greater than the deficits that would occur under the “baseline.” In fiscal 2022, for example, the baseline deficit is $1.719 trillion. But Biden’s proposal would increase that by $118 billion to $1.837 trillion.

By 2026—two years into a second hypothetical term for Biden—the baseline deficit would be $1.115 trillion, but Biden’s proposal would increase it by $299 billion to $1.414 trillion.

Under Biden’s plan, it would not be until 2030—a year after a hypothetically twice-elected Biden had left office in January 2029—that the deficit caused by his proposed budget ($1.477 trillion) would be less than the deficit in the projected baseline ($1.517 trillion).

Bottom line: Biden’s vision of a “fiscally responsible path” would increase the deficit above the projected baseline for eight straight years and have the government run a cumulative deficit of $14.531 trillion over 10 years.

But the administration would pat itself on the back for finally posting deficits that are less than the projected baseline—in the first two years after it has left office (if Biden were to serve two terms).

This is what the Biden administration calls a “fiscally responsible path.”

Yet, there is something worse. “President Biden’s budget proposal,” reports National Public Radio, “fulfills a campaign promise to remove a longstanding ban on federal funding for most abortions known as the Hyde Amendment.”

If Biden gets his way, the federal government will force Americans—through their tax payments—to fund abortions.

In Biden’s vision for America, the federal government will pay for the killing of some innocent unborn babies and place an ever-increasing burden of debt on the children who survive.