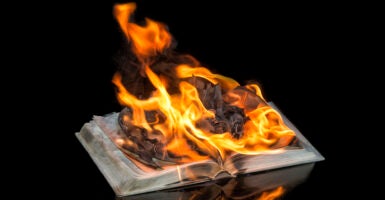 As a public figure of four decades, a black conservative woman shares how she navigates the “woke” cancel culture that pervades society today. (Photo: ART_magazin/Getty Images)

Liberal America doesn’t want to hear from African American conservatives because we go counter to its narrative that black people needed liberal saviors, especially ones who come bearing gifts of more government.

But we weren’t just canceled by liberals. For decades, liberals worked to put a wedge between black conservatives and our own communities. As a result, many African American leaders wouldn’t invite us to the table and wouldn’t allow us to offer our ideas to help solve problems in our own communities. We weren’t considered “authentically black”—whatever that is.

And so it continues today.

Black liberals, but especially white ones, had the audacity to lecture me about being a traitor to my race when I started thinking for myself as a young woman in my 20s—when I started questioning why we thought government was always the answer to our social ills.

They called me a traitor when I became the national spokesperson for the National Right to Life Committee and talked about the tragic wrong of abortion, especially in the African American community. They really lost it when I started a crisis pregnancy center to help black women keep their babies.

And when I led the effort to reform welfare in Virginia in the 1990s—trying to reform a system that discouraged marriage and work, that weakened the black family, and that fostered perpetual dependence—they really hit the roof!

Apparently, I didn’t know my place.

As someone who has been a public figure now for four decades, I have learned to navigate both that kind of cancel culture and the “woke” cancel culture that pervades society today.

1. First and foremost, don’t give a damn about cancel culture. If you do, you’re giving small-minded people control over you that they don’t deserve. Realize that these are often people who want to silence your ideas because they’re afraid if others hear them, they might agree.

2. Always be honest. The best defense is always the truth. Moreover, make sure you have your facts straight before you speak and that you can back up what you say.

But if you’re right and you give in, you have only served to embolden cancel culture. You have fed its voracious appetite and made it stronger, giving it more energy to seek out its next victim. You have made it harder for others to stand up for the truth, and as a result, many will continue to cower in silence.

4. Don’t try to cancel others. There’s no need to be cruel and adopt the tactics of cancellation. Here is where I go back to my faith-based roots. We all fall far short of perfection. We need to show grace and forgiveness toward others, especially if we hope for the same mercy from others when we inevitably stumble ourselves.

5. Be principled and don’t be a hypocrite. Hypocrites make easy targets for canceling and are fun for everyone to take down a few pegs.

6. Expect that anything you write or anything that you say in front of a camera (even your friend’s cellphone) could end up trending on social media or landing on the front page of a newspaper. If you’re not OK with that, think twice about saying or doing it.

7. There are an awful lot of people who are willing to deliberately take things out of context to make other people look bad. So always include context with what you say and write publicly, even if it means writing a slightly longer tweet or taking an extra 30 seconds to more fully explain your point. People may still take you out of context, but you will always “have the receipts,” as they say.

In the end, you can’t be afraid to speak up for what you know is right. You will inspire others to follow your lead, and when more people speak up, we’ll reach enough critical mass to eventually cancel “cancel culture.”

Remember the old days when you could debate and disagree and still be civil? Honest debate has been the cornerstone of Americans finding the best solutions to our biggest issues for nearly 250 years. For the sake of our society, it’s time to return to those days.