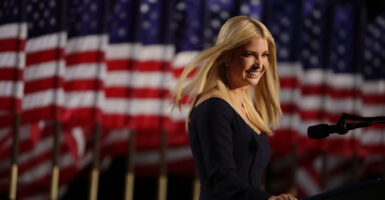 Ivanka Trump has declared, “I am pro-life and unapologetically so.” This conviction takes courage, and deserves strong support. (Photo: Alex Wong/Getty Images)

Life is precious in all of its forms, and I will not be complicit in its destruction. Or as my friend, Ivanka Trump, recently put it, “I am pro-life and unapologetically so.”

That stance isn’t a choice or a preference—it’s a conviction, and it’s a conviction that takes genuine courage to hold in today’s Washington, because it is under constant attack.

The pro-abortion left, which is a unanimous position of the progressive elites, seeks out every opportunity to force pro-life lawmakers to violate this sacred principle. The reason is simple, they want to force an impossible choice. When a pro-life lawmaker offers a proposal, the left will force them to either compromise on the pro-life stance in order to get most of the proposal passed, or do nothing.

The issue of life cannot be compromised. Numerical data or regulatory policy often has middle ground that is built-in or quite obvious. That type of compromise isn’t available on the issue of life. To pro-life Americans, no amount of abortion or abortion funding is tolerable.

Knowing this, liberals see every federal program and federal dollar as an opportunity for advancing their pro-abortion worldview. They believe all federal money must be available for abortion. Where they have the power, they force every conservative to answer the question: Do you support your proposal enough to violate your deeply held convictions?

In this way, progressives create a win-win for themselves. Either they have killed a good conservative policy idea, or they undermined the pro-life cause. This is a tried-and-true tactic that they will never abandon. I am a decades-long veteran of this war and I have seen it countless times.

Amongst the cruelest way that they wield this weapon is on the issue of women’s advancement. They have wrongly labeled abortion as a women’s issue and incorrectly assert that “abortion is health care.”

Neither statement could be further from the truth, but as talking points, these statements build fences around conservatives. In Washington, they make sure you can’t work on women’s issues unless you also support abortion.

Ivanka Trump had the courage to challenge this stalemate, and more may follow her lead.

In 2019, under her leadership, the Women’s Global Development and Prosperity Initiative was established. The Heritage Foundation is deeply supportive of the ideals and policy goals of this initiative, and we’ve partnered with the White House to promote them.

Recently, there was a proposal to include the Women’s Global Development and Prosperity Initiative within the mandate of the State Department’s Office of Global Women’s Issues. However, discussions to incorporate the initiative as part of the annual Defense Authorization Bill hit a roadblock.

Pro-abortion members of Congress, who have thus far resisted any attempt to allow a simple protection against abortion, prevented the proposal from being attached to this important legislation.

There is no conceivable reason for this stance unless they intend to use this office to promote abortion abroad. Additionally, they get the added benefit of—once again—challenging the pro-life commitment of someone on the right: this time, the very prominent and successful figure of Ivanka Trump.

I am proud of Ivanka Trump’s commitment to protect life, and I will stand by her to support that conviction, come what may. This isn’t the first time that conservative women have been treated this way in Washington, and it won’t be the last. But, it is my sincere hope that it will be one of the times that conservative women stick together and succeed together.

The Women’s Global Development and Prosperity Initiative is a worthy initiative and deserves widespread support. But given the history of the Office of Global Women’s Issues, that office should not be codified absent a guardrail in place to prevent it from promoting abortion.