The Kind of Leaders Needed to Save America 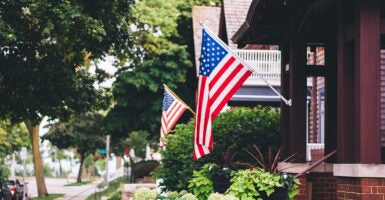 I’ve been involved in the conservative movement for over 30 years. One reason I’ve been doing it so long is because I know that conservatives have the solutions to the most pressing problems America faces.

We have the research and the data on how to eliminate most poverty, how to shore up the education gap, how to create jobs and build prosperity, how to fix our overpriced health care system, and so much more.

In fact, many of the tremendously successful policies that are being implemented in the states and that were implemented during the last administration were products of the conservative movement.

It’s undeniable that when conservative ideas flourish, so does America.

It’s also undeniable that when the left has power, America experiences decline, and the effects can be felt long after they’re gone.

Having led the largest conservative think tank in the country for the past three years, I have some thoughts about the kind of leadership the conservative movement needs to defeat the most extreme onslaught of leftist ideology our country has ever seen.

First and foremost, the movement needs leaders who follow the True North principles of conservatism—principles based on the genius of America’s founding and on the many lessons we’ve learned since; principles that have made this nation exceptional for nearly 250 years.

They include the idea that the federal government was created to protect fundamental freedoms and rights such as life, property ownership, freedom of speech and religion, the right to bear arms, and the right to be treated equally under the law.

They encompass the concept that the government works for the people, not the other way around, and that taxes should raise the minimum revenue necessary to fund only the constitutionally appropriate functions of government.

They also include the notion that the greatest driver of prosperity for all citizens is the free enterprise system.

But for a movement to grow in strength, it can’t just have the right principles, it must have the numbers. The conservative movement needs millions more adherents, advocates, and activists to push back against the left’s agenda and ensure that only those who believe in constitutionally limited government are elected to lead us.

Conservative leaders must grow the movement without watering down its principles. That means attracting people who don’t necessarily know they’re conservative but who practice conservative principles in their daily lives.

We must reach out more to non-traditional audiences of women, minorities, and young people, and show them how our solutions provide the best outcomes for all Americans.

Leaders must also train their organizations to speak to people’s hearts and minds so they have the ability to change both.

The conservative movement also must reach more Americans speaking about the dangers of the left’s ideas. Higher taxes, government-run health care, “canceling” those they disagree with, and gun control measures that only make criminals out of the law-abiding all create a toxic environment for everyone’s individual liberty.

And it doesn’t stop there: Defunding the police despite the evidence that such efforts have already led to surges in violent crime, forcing women to let men into their locker rooms, and climate change bills that do nothing for the environment but would increase the costs of food, electricity, and gas for families already struggling to pay the bills—these things erode our freedoms, our safety, and our society.

But conservatives can’t just show Americans that we oppose the left’s destructive ideas; we have to show them we have substantially better ones. To do that, we must find ways to get past the legacy media and social media censors to expose more Americans to the truth.

Finally, realizing that we can accomplish more together than any single organization could ever do alone, the conservative movement needs leaders who can unite many of its various elements, including social conservatives, fiscal conservatives, libertarians, populists, and others.

Our leaders mustn’t adopt leftist tactics such as “canceling” other conservatives they don’t agree with. To be successful, the movement must focus on defeating the true opponents of American greatness, not each other.

Leaders must realize we don’t have to have one way forward—different organizations can utilize different strategies—but we need to be united. We may play different positions on the team, but we’re all wearing the same color jerseys.

Luckily, the conservative movement has several such leaders. But if we’re going to defeat a better-funded and much larger left, we’re going to need a lot more of them. The very fabric of our republic is being torn, and there is much work to do to save it. To win this fight, conservative leaders must be well-prepared for the challenges ahead.

Only then can we be assured we’ll still have an America where freedom, opportunity, prosperity, and civil society can flourish once again.