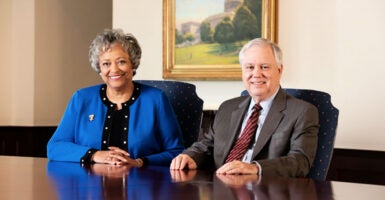 The president and executive vice president of The Heritage Foundation, Kay C. James and Kim Holmes, jointly announced Monday that they will be resigning from their leadership posts at the Washington-based public policy think tank.

“When we came on board as the executive leadership team three years ago, we set several goals and told Heritage’s board of trustees that we would serve for three to five years to see them through,” James said in a statement.

“We accomplished everything we set out to do. Now, it’s time to let someone else take the reins,” she added.

James was named president of The Heritage Foundation on Dec. 19, 2017. Holmes took the role of executive vice president on Feb. 6, 2018.

James started her Washington career as a member of the National Commission on Children under President Ronald Reagan, going on to serve as associate director of the White House Office of National Drug Control Policy and then as assistant secretary for public affairs at the U.S. Department of Health and Human Services under President George H.W. Bush.

She also served as President George W. Bush’s director of the Office of Personnel Management starting in 2001.

Holmes formerly served as The Heritage Foundation’s vice president for foreign and defense policy studies and director of its Davis Institute for International Studies from 1991 through 2012, except for the majority of President George W. Bush’s first term from 2002 to 2005. During that time, he served as assistant secretary of state for international organization affairs.

Holmes said in a statement that he’s proud of his tenure at Heritage.

“It has been a privilege to work at Heritage for over three decades,” Holmes said, adding:

I am profoundly thankful to Kay James and to Heritage’s founder, Ed Feulner, for their support and leadership over the years.

I am deeply proud of our accomplishments and honored to have played a role in helping Heritage to be ‘True North’ for the conservative movement long into the future. I look forward to seeing the great successes yet to come.

Regarding her more than three years of service as president of Heritage, James said she hopes “that one of the most profound, yet simple, things I did was to develop and commit to writing Heritage’s set of 14 ‘True North Principles of Conservatism.’” She added:

Articulating them helps us to be fully transparent with the public and policymakers about the principles that guide our policy recommendations, to hold this organization accountable to always following those principles, and to lay out the bedrock principles for which the conservative movement must always stand.

“Over the past three years, Kim and I achieved everything we set out to do, and we did it with a terrific group of dedicated people who want nothing but what’s best for America,” she said. “It has been an absolute honor and privilege to work with them.”

Binion added that under the leadership of James and Holmes, “Heritage maintained an impeccable record of thought leadership and policy influence.”

Personally, I’m grateful for their unending and continuing generosity when it comes to teaching me about policy, politics, and process … and life!