5 Examples of How the Conservative Movement Is Leading the Way 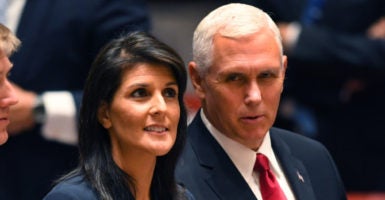 As the stock market swings wildly up and down, as a virus casts a shadow across the country, and as politics resemble mud-wrestling more with each passing day, the radical socialists couldn’t be happier.

America, they say with barely disguised satisfaction, is headed for the ash heap of history, and nothing can prevent this nation from becoming extinct unless it takes a sharp turn to the left.

Americans, they declare, must surrender more of their individual freedoms for the comforting embrace of Big Government.

To which conservatives quickly respond, “Nonsense!”

The record is clear that freedom leads to prosperity, opportunity, and a civil society.

President Donald Trump’s tax cuts and the repeal of reams of job-killing regulations, for example, have grown the economy and reduced unemployment to levels not seen in nearly 50 years. Minorities and women in particular have benefited from the Trump-led growth.

Freedom works everywhere. Thanks to the “invisible hand” of free enterprise, 2 billion people around the world no longer live in poverty.

India now has the largest middle class in the free world. The totalitarian ways of China, Cuba, North Korea, and Venezuela prove that economic planning leads to dictatorship. It is a fatal conceit of socialism that government can make better decisions for us than we can for ourselves.

“We are at a pivotal time in our history,” Heritage Foundation President Kay Coles James said at the recent Conservative Political Action Conference. “We are engaged in a critical battle between those who want to preserve this nation and those who want to erase our founding principles,” transforming America into a giant socialist state.

Conservatives reject the leftist argument that America’s best days are behind her. They point to the remarkable performance of a key American institution, the conservative movement, which is leading the way in five essential areas.

First, conservatives offer a relevant philosophy for these turbulent days.

The free market inspires innovation and entrepreneurship. The idea of limited constitutional government provides the solid foundation for opposition to government-run health care and other so-called entitlements. The school-choice movement is challenging the educational monopoly of government schools in an increasing number of states and localities.

It is up to conservatives to tell the truth about the ruinous impact of the far left.

Second, the conservative movement is a national movement composed of dozens of single- and multi-issue organizations.

Conservatives make up 35% of the population, amounting to about 110 million Americans, a formidable base for the movement.

Conservatives are evenly distributed regionally: 39% of Southerners are conservative, 36% in the Midwest, 31% in the West, and 30% in the East. Conservatives are represented in every income group, but they are strongest in the $30,000-$75,000 range with 36%.

And there is more proselytizing to be done among young people and blacks, who represent 26% and 13.4% of the population, respectively.

Third, a political truism of long-standing is that money is “the mother’s milk of politics” (credited to California Democratic politician Jesse Unruh).

Although it does not have as many billionaires as the left, the conservative movement is adequately financed.

For example, the total annual income of the Big Three of the Washington think tanks—The Heritage Foundation, the American Enterprise Institute, and the libertarian Cato Institute—is a combined $170 million, with Heritage leading the way in 2018 at $87 million.

The combined yearly income of the leading conservative youth groups—the Young America’s Foundation, the Leadership Institute, and the Intercollegiate Studies Institute—is approximately $50 million, with YAF in first place at $24 million.

While the conservative movement has no profligate donor such as leftist billionaire George Soros, it can depend upon millions of Middle Americans who underwrite conservative causes through direct mail, email, and personal contact.

Direct mail continues to be a rich source of income for conservatives. During his remarkable 50-year career, direct-mail guru Richard Viguerie has raised an estimated $7 billion for his conservative clients.

Fourth, the conservative movement is extremely effective at communicating, reaching millions of readers and viewers every day.

Conservative media range from the Fox News Channel, which has dominated cable news for decades, to talkmeister Rush Limbaugh with a weekly radio audience of 15 million. In print, there is The Wall Street Journal with a daily circulation of about 3 million, and National Review, whose circulation of 100,000 is the highest of any opinion journal in America.

Articulate commentators such as Ben Shapiro and Charlie Kirk of Turning Point USA attract hundreds of thousands of followers in the rising generation, thanks to social media.

Fifth, and equally importantly, the conservative movement has charismatic, principled leaders. It is leaders, after all, who bring a movement to glory or shame. It is leaders who change the world for better or worse.

Conservatism has been blessed for the past half-century to have leaders, such as Sen. Barry Goldwater, the most consequential loser in modern political history; editor/author William F. Buckley Jr., who by reason of his wealth and social background could have been the playboy of the Western world, but chose instead to be the St. Paul of American conservatism; the historian Russell Kirk, who gave the movement its name with his magisterial work “The Conservative Mind”; and President Ronald Reagan, who restored Americans’ confidence in themselves, sparked the longest period of economic growth since World War II with supply-side economics, and ended the Cold War without firing a shot.

Conservatives who have made a difference in Washington with their legislative legerdemain are Republican Sens. Ted Cruz of Texas, Marco Rubio of Florida, Mike Lee of Utah, Ben Sasse of Nebraska, Josh Hawley of Missouri, Tom Cotton of Arkansas, and Rick Scott of Florida, and Reps. Doug Collins of Georgia, Ted Yoho of Florida, Scott Perry of Pennsylvania, Ted Budd of North Carolina, and Jim Jordan of Ohio, and all the members of the House Freedom Caucus.

They constitute a vigilant team committed to preserving the first principles of the founding.

That’s the responsibility of every conservative in these perilous times, which are testing our minds, our hearts, and our souls. Are we up to it? Of course, we are.

After all, as Reagan said in his first inaugural address: “The crisis we are facing today” requires us “to believe that together with God’s help, we can and will resolve the problems, which now confront us. And, after all, why shouldn’t we believe that? We are Americans.”