America Must Lead Free World in Elections to Interpol Commission 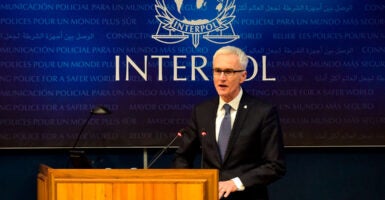 An Interpol commission offers the only meaningful pathway to protect the rights of individuals who are unfairly targeted by regimes such as Russia through the international police organization. Pictured: Interpol Secretary-General Jurgen Stock speaks Nov. 27, 2019, during a ceremony marking Interpol's 30th anniversary in Lyon, France. (Photo: Romain Lafabregue/AFP/Getty Images)

Interpol, the international organization of police organizations, has an important election coming up.

That election will determine the new membership of a body known as the Commission for the Control of Interpol’s Files. The commission’s job is to check that the processing of personal data by Interpol complies with the police organization’s own rules, and to decide on requests for access to data and for correction and/or deletion of data processed by Interpol.

Basically, the Commission for the Control of Interpol’s Files is where you have to go if you believe you have been wrongly targeted by one of Interpol’s famous “red notices” for those sought by the police organization.

Members of the commission aren’t allowed to participate in cases involving their home nation. If the commission is considering a red notice targeting a Russian individual, for example, the Russian member of the panel must step aside.

But the overall balance of power on the Commission for the Control of Interpol’s Files matters more than the independence (or subservience) of any particular member.

The commission is made up of seven individuals elected, on a “one nation, one vote” system, by Interpol’s General Assembly. Candidates are selected by their home nation.

Currently, the  seven members hail from the U.S., France, and Finland, plus Russia (a tyranny), Moldova (a weak democracy with strong links to Russia), Algeria (a military dictatorship), and Angola (a systematically repressive one-party state). At best, the balance between the democracies and the dictatorships is even.

When Interpol’s General Assembly meets next, in Turkey Nov. 23-25, it will elect seven new commission members who will take office the following March. Nominations are due June 15, and this election will completely turn over the membership of the commission.

The Commission for the Control of Interpol’s Files offers the only meaningful pathway to protect the rights of individuals who are unfairly targeted by regimes such as Russia through the police organization.

Because it is elected by Interpol’s General Assembly, the commission isn’t truly independent of Interpol. But it is the only check on Interpol’s operations that is at least supposed to be separate and impartial.

The commission is vital to ensuring that Interpol upholds its obligation to avoid involvement in politics.

The U.S. must, in collaboration with its fellow democracies (and in particular the U.K., France, Germany, and Japan), act to ensure that it backs a slate of well-qualified candidates from a worldwide range of democratic states. Lawless regimes such as Russia, Algeria, and Angola should not be represented.

Undoubtedly, lawyers and legal experts who are brave, honorable, and independent may be found in all three of these states. However, candidates for the commission are chosen by the regime and therefore must be expected to be friends of the regime.

For too many years, however, the United States and other democratic members of Interpol sat back while autocracies piled up influence in Interpol’s leadership, meeting locations, and budget.

The upcoming election is a vital opportunity for the U.S. to take practical steps to demonstrate support for Interpol’s fundamental rules.