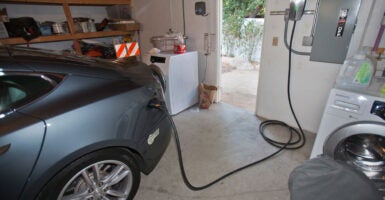 The White House’s $2.3 trillion “infrastructure” plan will try to remove gas cars from the U.S. economy. Pictured: A Tesla electric car recharging in the garage of a Los Angeles home. (Photo: Citizen of the Planet/Education Images/Universal Images Group/Getty Images) 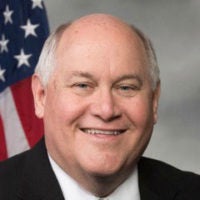 If Speaker of the House Nancy Pelosi, D-Calif., and Rep. Alexandria Ocasio-Cortez, D-N.Y., continue to have their way, families across the U.S. will pay more in taxes so that millionaires in California can write off a new Tesla.

Within President Joe Biden’s infrastructure plan is $174 billion that would both extend the electric vehicle tax credit as well as replace government cars with electric ones. To put this level of waste into perspective: $174 billion is more than practically every state budget.

The proposal would federalize the failed climate mandates in California. It’s not hard to see what’s being forced on states (like my home state, Kansas) next from the state that has become a socialist laboratory for bad policy experiments. California’s governor even recently signed an order that will phase out gas-powered cars by 2035. This is not based on reality.

Right now, electric cars comprise less than 2% of the automotive market in the U.S. Signing an order to phase out cars will only punish working-class Americans.

It’s only one example of the many radical climate mandates that have created an affordability crisis in the state, causing many to flee. Democrats haven’t seemed to notice the thousands leaving California for places like Texas. Instead of learning from their mistakes, their plan is to double down on the failed climate policies of California.

But hardworking American families, who are dealing with rising prices on most household goods, don’t want to subsidize wealthy Americans to buy a Tesla or to pay for the federal government to purchase electric cars. There’s simply no reason to—it’s pure waste.

In addition, not many Americans will choose electric vehicles because they can only be driven about halfway across a state the size of Kansas before needing to be recharged for hours.

That’s why I’ve introduced two pieces of legislation to push back against this radical socialist agenda. The Close the Double Subsidy Loophole for Electric Vehicles Act will ensure that American taxpayers do not continue footing the bill for electric vehicle tax credits that are overwhelmingly claimed by wealthy individuals and corporations in states that already heavily incentivize electric vehicles.

Under current law, the tax credit for electric cars does not take state subsidies into account when it is calculated. This means that in states like California, where electric cars are heavily subsidized, many can double dip with state and federal subsidies to buy a qualifying electric vehicle.

According to data from tax returns filed in 2019, 80% of taxpayers claiming this credit had adjusted gross income of $100,000 or more. In addition, it is estimated that roughly half of the forgone revenue for this credit from 2018 to 2022 stems from corporations claiming the credit.

My legislation would close the loophole while still allowing buyers of electric vehicles to benefit from state and federal tax breaks.

In addition, Biden’s plan to purchase 645,000 electric vehicles for the government could cost over $20 billion. That’s why I’ve also introduced the No Subsidies for Government Purchases of Electric Vehicles Act.

This would ensure the federal government does not use the tax credit to grant the seller of the vehicle a large tax credit against their federal tax rate. If this is allowed, it would introduce a poor incentive for those selling cars that could limit your buying options in addition to encouraging wasteful government spending.

Americans deserve to buy a car that will suit their lives—not a car that Washington decides they should be driving. Instead of including electric vehicles as part of your options when buying a car, Democrats are incentivizing them with the goal of removing gas cars. This means you’ll be stuck without options.

If Americans don’t want to buy electric vehicles for whatever reason, they don’t have to. Democrats in Congress should be focused on reopening the economy and getting Americans back to work—not trying to implement California’s failed climate policies.