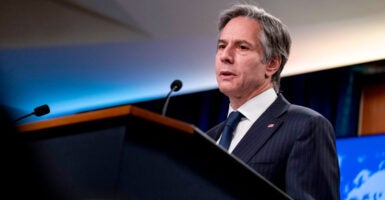 Secretary of State Antony Blinken tells reporters that “religious freedom is not more or less important” than any other right as he discusses the annual Report on International Religious Freedom on May 12 at the State Department in Washington. (Photo: Andrew Harnik/Pool/ AFP/Getty Images)

The Biden administration is making a stark departure from past administrations in how it talks about, and treats, religious freedom.

In his remarks May 12 on the release of the 2020 Report on International Religious Freedom, Secretary of State Antony Blinken correctly asserted that “religious freedom is a human right,” one at the heart of what it means to be human.

This is a theme that President Joe Biden’s secretary of state has revisited several times since his March 30 speech repudiating the Unalienable Rights Commission convened by his immediate predecessor as secretary of state, Mike Pompeo.

Blinken’s repudiation of the commission’s report is purely political; because the commission highlighted the importance of religious freedom, the progressive left saw the report as presenting a stumbling block to advancing abortion and LGBTQ rights, which are top priorities of the Biden administration.

The administration also is seeking to export that ideology abroad through its embrace of rights based on sexual orientation and gender identity.

Religious freedom requires more than an absence of violence and discrimination. It is a prepolitical natural right. It encompasses an individual’s right to freely believe, or not to believe, in religious truths and to manifest those beliefs in speech and action as expressed in the United Nations’ Universal Declaration of Human Rights, which has global support, and the International Covenant on Civil and Political Rights, to which the U.S. is a party.

Religious freedom also includes the right to join a religious community and extends to that community the right to develop and teach its accepted doctrines, as well as to train its clergy and educate its members. Religious freedom even applies to individuals and faith communities that peacefully adhere to politically incorrect or offensive beliefs; if it doesn’t, it’s meaningless.

But religious believers in the West increasingly find their religious liberties under attack by progressive ideology that is hostile to traditional faiths. From Europe to Australia to Canada, a growing number of individuals—including members of the clergy—have become victims of the progressive left.

Authorities use “hate speech” laws to punish those who profess the belief that marriage is between a man and a woman, or that gender is biologically determined. As legal scholars Michael Farris and Paul Coleman explain, “so-called hate-speech laws are powerful tools in the hands of those who wish to censor unpopular opinions, silence political opposition, and remove irritating voices that speak out against the orthodoxies of the day.”

In the case of Päivi Räsänen, a Lutheran woman who is a member of the Finnish Parliament and former minister of the interior, her religiously motivated speech led to her being indicted for hate speech that was considered derogatory and discriminatory against the LGBT community. She now faces potential jail time.

According to a translation of the state prosecutor’s press release, Räsänen’s statements “violate the equality and dignity of homosexuals, so they transcend the boundaries of freedom of speech and religion.”

In her own public statement, Räsänen said: “Ultimately, the three charges brought against me have to do with whether it is allowed in Finland to express your conviction that is based on the traditional teaching of the Bible and Christian churches. I do not see I would have in any way defamed homosexuals whose human dignity and human rights I have constantly said to respect and defend.”

Another case involves Jody Maillet, a professor at McMaster University in Toronto. Maillet is the father of young children who attend a Catholic school, and he is under investigation by Toronto police and his employer after asking the school board not to fly a rainbow flag celebrating lesbian, gay, bisexual, and transgender individuals.

In his presentation to the school board, Maillet quoted the Catechism of the Catholic Church and urged school administrators to adhere to its teachings. Although the Archdiocese of Toronto has come to his defense, local politicians and LGBT advocates accuse him of homophobia.

And just this month, the Rev. Dr. Bernard Randall, chaplain at an Anglican school in the U.K., was reported to a counterterrorism group as a potentially violent extremist and danger to children after delivering a sermon questioning LGBT ideology. Randall told students that they “do not have to accept the ideas and ideologies of LGBT activists” when those ideas conflict with Christian values. He was fired.

Certainly none of these individuals has been free to “manifest [his or her] religion or belief in teaching, practice, worship and observance,” as they are entitled to under the Universal Declaration of Human Rights.

These incidents of religious discrimination have not led to violence against people or property as has occurred to Uyghur Muslims in Xinjiang, China, or Christians in Nigeria and other places described in the 2020 Report on International Religious Freedom. But they nonetheless constitute violations of religious liberty.

By contrast, special rights awarded on the basis of sexual orientation and gender identity do not enjoy universal consensus. In fact, no international treaty recognizes sexual identity categories or rights.

However, in a controversial report last year the U.N.’s special investigator, or rapporteur, on freedom of religion or belief chastised African countries such as Egypt, Tunisia, and Uganda for religious arguments or politically active religious groups that impede the progress of “LGBT+ and abortion rights.”

It’s no wonder that many in the developing world view promotion of these progressive and controversial values as cultural colonialism.

So far, the Biden administration has committed to advancing ideology that endangers religious freedom. And now it has demoted religious freedom to just one “co-equal” right among many, in contrast to the primacy it enjoys under the First Amendment and the International Religious Freedom Act.

This does not bode well for the future of religious freedom and the peace and prosperity that religious pluralism fosters. It’s time for Biden to live up to his own support for the International Religious Freedom Act, the U.S. commitment to the Universal Declaration of Human Rights and the International Covenant on Civil and Political Rights, and our own understanding of the “first freedom” in the U.S. Constitution.

America has been at the forefront of protecting international religious freedom over successive Republican and Democratic administrations. As conflicts between religious freedom and progressive policy preferences increase around the world, the Biden administration should continue America’s global leadership in defense of religious liberty for everyone.