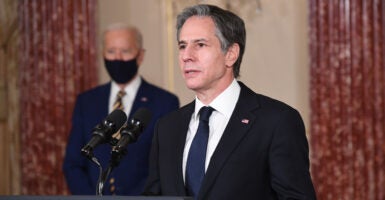 President Joe Biden’s nominee for a top State Department post runs a private organization that has received tens of millions from the federal agency.

Biden’s nomination of Lee Satterfield as assistant secretary for the State Department’s Bureau of Educational and Cultural Affairs has prompted concerns about the appearance of a conflict of interest.

Satterfield is president and chief operating officer of Meridian International Center, a global diplomacy nonprofit. She has been there for the past six years.

She previously worked in both the Barack Obama and Bill Clinton administrations, as well as for the Democratic National Committee.

About $35.9 million of Meridian’s $40.7 million budget comes from government grants, most of that from the State Department, according to the organization’s Form 990 for the Internal Revenue Service from 2018.

“This is a nonprofit that received 90% of its funding in 2018 from the Department of State, and now the president of that organization will have a leadership role in the State Department,” Matt Buckham, co-founder of the American Accountability Foundation, a conservative watchdog group, told The Daily Signal in a phone interview.

“It’s a revolving door,” Buckham said. “She jumped to the [Meridian] organization at the tail end of the Obama administration.”

The State Department provided $38.6 million to Meridian in fiscal year 2018, according to USASpending.gov, a government website that shows spending. The U.S. Trade and Development Agency, an independent federal agency, provided $1.6 million.

USASpending.gov noted that 95.98% of the federal money going to Meridian comes from the State Department.

So far, the “amount obligated” from the federal government to Meridian for fiscal 2021 is $8.7 million.

The mission of the State Department’s Bureau of Educational and Cultural Affairs, according to its webpage, is “to increase mutual understanding between the people of the United States and the people of other countries by means of educational and cultural exchange that assist in the development of peaceful relations.”

The nonprofit Meridian International Center was established 60 years ago, according to its website. The White House describes the center as a nonprofit center for diplomacy that strengthens engagement between the United States and the world.

Nonprofit organizations file their IRS Form 990s based on the calendar year of January through December, while federal government spending is based on the fiscal year of October through September. So, reported numbers can vary.

Satterfield’s husband is Patrick Steel, outgoing CEO of the media company Politico, which covers Washington politics and government. Steel, a former investment banker and special assistant to Clinton, has headed Politico since 2017 and announced his coming departure in February.

“Every Biden-Harris administration nominee goes through a robust process with agency ethics officials and the Office of Government Ethics to disclose, identify, and resolve potential conflicts of interest,” the spokesperson said, adding:

If any likely conflicts are identified, the nominee’s ethics agreement will address how they will be resolved. We are confident that Ms. Satterfield will comply with the federal ethics laws if confirmed. We expect all of our officials to be mindful to avoid any conflicts, and the department’s Ethics Office stands ready to assist.

The Senate Foreign Relations Committee received Biden’s nomination of Satterfield for the State Department post May 4. But the committee does not yet have the nominee’s paperwork and has not officially begun the vetting process, Suzanne Wrasse, spokeswoman for Sen. James Risch, R-Idaho, the panel’s ranking member, told The Daily Signal in an email.

The White House did not respond to inquiries on the matter.

In 2015, Satterfield became executive vice president of Meridian International Center after leaving the Obama State Department, where she had worked since 2009. She served as deputy chief of protocol and then deputy assistant secretary for the Bureau of Educational and Cultural Affairs, the section Biden tapped her to lead.

A spokesperson for Meridian did not respond to The Daily Signal’s inquiries for this report.

According to the White House, her accomplishments at Meridian include leading a task force on equity, diversity, and inclusion.

In 2011, Satterfield joined Jill Biden, then the nation’s second lady, as a member of the U.S. delegation to the 2011 FIFA Women’s World Cup in Germany.

In 2012, Satterfield was chairwoman of a cultural working group as part of the U.S.-China Consultation on People-to-People Exchange in Beijing.

Earlier, during the George W. Bush administration, Satterfield worked for the Democratic National Committee as chief operating officer and chief of staff. She also was director of convention planning.

From 1997 to 2001, she worked in the Clinton Labor Department, first as deputy chief of staff and later as chief of staff for Labor Secretary Alexis Herman.

Before that, Satterfield worked in the Clinton White House from 1994 to 1997 as a special assistant to the president.

Spokespersons for Senate Foreign Relations Committee Chairman Robert Menendez, D-N.J., did not respond to inquiries from The Daily Signal about the Satterfield nomination by publication time.