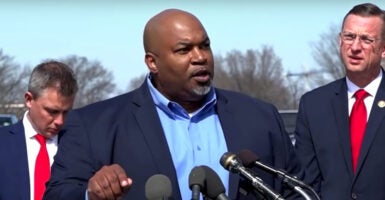 As stated by North Carolina Lt. Gov. Mark Robinson, pictured, "it is insulting to suggest anyone could not get a free ID," reader Brian Reigart writes. "And he is on the money in saying it’s about power and narrative." (Photo: Mark Robinson for NC)

Editor’s note: The Daily Signal’s coverage of the debate over election reforms continues to engage our audience. Here’s a sampling from the mailbag at [email protected]—Ken McIntyre

Dear Daily Signal: I was greatly encouraged by North Carolina Lt. Gov. Mark Robinson’s remarks on voter ID (“Lt. Gov. Mark Robinson Explains Why It’s Not Racist to Require ID for Voting”). It is incredible to see some politicians and activists say that it’s racist to require a free ID to vote, when IDs are required in so many other activities of American life.

As Mr. Robinson stated, it is insulting to suggest anyone could not get a free ID. And he is on the money in saying it’s about power and narrative.

We are well on the way to destroying the country that has brought freedom and prosperity here and around the world. The United States is not perfect, but we’re the best option going.

God bless Lt. Gov. Robinson for standing up, and may God bless the USA.—Brian Reigart

Absolutely right on! Lt. Gov. Mark Robinson said everything that needed to be said. No more, no less. And I’m sure the Rev. Martin Luther King Jr. would have said the same.

I am a lawful immigrant, naturalized citizen, and veteran of the U.S. Navy.

What an insult it is to claim that requiring citizens to obtain an ID in order to vote discriminates against blacks and other groups, suggesting that it is beyond their means or comprehension to perform that small task. Politicians and others who put out such garbage are the true racists.—Andrew F. Bender, Fallbrook, Calif.

So proud to read this and know this man truly cares for all and says it straight. May we open our minds and let his words guide us all.—Patricia Adams

Amen to you, Mr. Robinson. Keep speaking. You tell the truth and the truth will set us all free.—Dan Farmer

Dear Daily Signal: I just read Fred Lucas’ story on the statement by 21 civil rights leaders defending Georgia’s new election law (“21 Black Leaders Denounce the Left’s Lies About Georgia Election Law”). If the Senate Judiciary Committee can paint Georgia law as Jim Crow, they will have no problem bulldozing all the states.

What can I do here in rural New York to fight this horrible mischaracterization? Their intentions are very apparent, but how do we convince people it is about power and steel fisted control?

How do we empower minorities to be in charge of their lives, hopes, and dreams? Who will represent our canceled voices? Who will shout from the rooftops that our history is the very reason we are a great and diverse people?

I know there are many of you that have lent your voice to combat the lies, only to be suffocated by media silence. We need a new Paul Revere to broadcast that the commies are coming. And they want more than your money, sweat, and pride. They want your soul. God help us all.—Sally Bateman, New York

One simple and powerful suggestion would be to clear the voter registration rolls every five years or so. This would go a long way to eliminating dead voters, moved voters, and so on.

Every professional license, hunting or fishing license, and driver’s license must be renewed periodically. None of these renewals is automatic. Each requires some effort on the part of the license owner.

I would argue that voting is much more valuable and important than a fishing license. It should require at least the same amount of effort to renew.—Larry Houston

Dear Daily Signal: This is in regards to the commentary article by Sen. Jim Inhofe, R-Okla., “Only ‘Sore Losers’ Want to Abolish Electoral College.” You know, the Founding Fathers got a lot of things right. Yeah, I mean all those old white guys.

They established one branch of government, the legislative branch, with one house elected by popular vote and a second house where all states were equal. They also established the executive branch, where the president was elected via the Electoral College.

By that system, there was a blend of popular vote and equality for the small states. At the time, the concern was that the large states should have a major say in the operation of the country, but they couldn’t steamroller all the smaller states.

Today, it is still large states versus small states. Or, more accurately, large urban populations versus everyone else.  I have lived in Chicago and New York.  I have no desire to see the policies of those and other large cities govern the entire country.

Where did all the trillions sent to cure the ills of the inner cities go? It seem that these trillions went only to support policies that ultimately failed. Is there any major city that doesn’t have the same problems it had 40 years ago?—Robert Bunce, Colchester, Conn.

Maine would be a “joiner” in the National Popular Vote Interstate Compact. How can we as citizens be informed about what is happening on this issue? The newspapers are no help at all.

I did sign a petition at one time to discourage my state from joining a compact, but have no idea where Maine stands at this point. Thanks for your help.—Kay Webster, Winthrop, Maine

Power is the reason there is the effort against the Electoral College. To coin a phrase from Rep. Ilhan Omar, D-Minn., it’s all about power, baby.

Democrats’ lust for power is what drives them.  They abhor “We the People.” We must, with God’s help, stop them. Otherwise, we will find ourselves living the nightmare of a socialist government.—Shira M. Levine

Why is the National Popular Vote Interstate Compact legal? It gives nonresidents of a state a vote in that state’s choice.

Not much different than having illegal immigrants vote, or people in other nations. I do not recall hearing of this compact being challenged at all.—Glenn Taylor

Dear Daily Signal: Thank you for Fred Lucas’ article on Hunter Biden’s questionable gun purchase (“Did Hunter Biden Violate Law in Buying Handgun? 3 Big Questions”). Just wondering if his “case” will be dropped or be dragged out over his father’s term as president.

Also, with our southern border being overrun with illegal immigrants, what are the odds of many more illegal firearms coming into this country?—Larry Humphrey

Dear Daily Signal: Thanks for Matthew Dickerson’s commentary, which is the very first insightful, accurate portrayal of the so-called American Rescue Plan (“Biden’s Business Tax Hikes Would Be a Self-Inflicted Mistake for America”). It’s just another example of Washington’s not shedding a light on legislation before members of Congress vote.

I’m 80 years old. What happened with the American Rescue Plan is very similar to 2010 before passage of the Affordable Health Care Act, when everyone wanted to know its contents and House Speaker Nancy Pelosi said: “We have to pass the bill so that you can find out what is in it.”

Nothing has changed.—Charlie Willcox, Mobile, Ala.

Dear Daily Signal: Since when is it the role of the federal government to interfere so directly in labor and capital (“Kamala Harris to Lead White House Task Force Encouraging Union Membership”)?

Odd how I don’t recall any effort by President Biden and Vice President Harris to affect the unionization effort at Amazon. Wonder why?

On the other hand, we can infer that Kamala Harris finally has something more exciting than the border mess to incite her to actually doing something.—Morgan Spector, Lancaster, Calif.